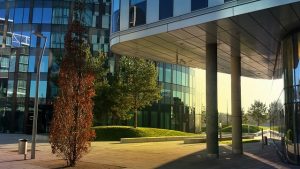 Researchers at The Ohio State University have determined that random forces, such as the wind blowing through the trees, can produce vibrations that are useful for generating electricity. While their discovery is still in the early stages of research, it opens the possibility for creating self-powered sensors that could be used to monitor the structural integrity of infrastructure, such as buildings, roads, and bridges.

Sensors already monitor these structures by measuring the vibrations that pass through them. The Ohio State team found out that those same vibrations—which can be caused by cars driving over a bridge, a breeze that makes a building sway ever so slightly, or even subtle seismic shifts—can be used to generate electricity. “In fact, there’s a massive amount of kinetic energy associated with those motions that is otherwise lost,” said lead researcher Ryan Harne. He continued, “We want to recover and recycle some of that energy.”

His team’s experiment involved a tree-like device, with branches connected to a trunk via a strip of electromechanical material. The electromechanical trees take advantage of internal resonance, a phenomenon in which certain structures maintain vibrations at a consistent frequency despite large, random inputs. Other research groups have tested similar self-powered sensors and even similar tree structures, but the Ohio team’s work is notable because they used realistic, random vibrations that we can expect to see in real-world settings. “In addition, we introduced massive amounts of noise, and found that the saturation phenomenon is very robust, and the voltage output reliable. That wasn’t known before,” Harne said. The results of the experiment were published in a recent issue of the Journal of Sound and Vibration.