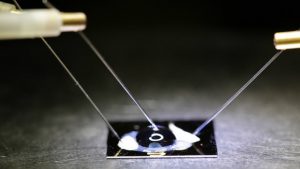 Researchers have taken a big step toward developing an implantable chip that can detect DNA mutations in real-time and transmit them wirelessly to a smartphone or computer. A team of bioengineers and the University of California, San Diego designed an electrical graphene chip that can detect a common mutation in DNA. The chip could become a baseline for similar chips that could be used in additional medical applications, such as blood tests for cancer screen, monitoring of disease biomarkers, and real-time detection of viral and microbial sequences.

We are at the forefront of developing a fast and inexpensive digital method to detect gene mutations at high resolution—on the scale of a single nucleotide change in a nucleic acid sequence.

The chip uses a DNA probe that is embedded onto a graphene field effect transistor. The probe is an engineered piece of DNA that has been coded for the most common genetic mutation, called a single nucleotide polymorphism (SNP). Whenever a piece of DNA with the same mutation binds to the probe, and electrical signal is produced. This chip is unique because the graphene transistor enables it to run electronically. “This is the first example of combining dynamic DNA nanotechnology with high resolution electronic sensing,” said researcher Michael Hwang. “The result is a technology that could potentially be used with your wireless electronic devices to detect SNPs.”

The study was published on June 13 in the journal Proceedings of the National Academy of Sciences. Looking ahead, the researchers will work on scaling up the technology and adding wireless capability to the chip.