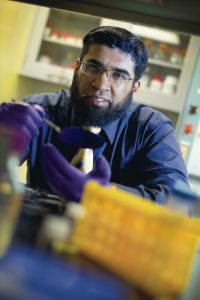 A team of electrical engineers  have developed a device disguised as tissue that uses electrical profiling to detect cancer at the cellular level. “Discovering the cancer earlier, before it metastasizes, is essential to surviving cancer,” said lead researcher Samir Iqbal. “Our device has the potential to do that.”

The team at the University of Texas at Arlington created the tool, which spies on cancerous cells by mimicking layers of the body’s tissue. Iqbal says the device “fools blood samples into thinking its actual tissue” so that cellular behavior can be tracked in real time. The researchers designed the device in AutoCAD and then used spin coating followed by photolithography to fabricate it out of silicon-based materials. Finally, they etched the surface to match the texture of real tissue. According to the researchers, the finished device is simple, reusable and efficient.

When cells encounter the fake tissue, they have an electrical reaction, and cancerous cells display an unusual pulse magnitude and shape. “We used inherent properties of the cell walls to create a diagnostic tool. The cancer cells behave differently as they come into contact with the nanotextured walls. They dance,” Iqbal explained.

The research was funded by a $480,000 National Science Foundation grant. It is described in Nature’s Scientific Reports.