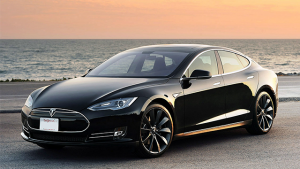 An electric vehicle performs so well that it has actually broken the Consumer Reports rating system. The Tesla Model S P85D sedan was so fast, safe, and technologically slick that it initially received a score of 103 out of 100—the highest score the magazine has ever given. Editors adjusted their scoring system so that is would receive a logical 100 out of 100, but that doesn’t make it any less impressive. This is an exciting shift for electric vehicles, which many consumers don’t find appealing, according to a study published by the National Academy of Sciences this year.

Now, Consumer Reports calls the record-setting Tesla model a “glimpse into the future of the automotive industry.” It’s interesting that Tesla, which is a tech startup, outperformed the big automotive companies again, as it beat its own Model S which previously held the record record high score. The P85D zooms from 0 to 60 in just 3.5 seconds, with an almost silent engine that doesn’t use a drop of gasoline. Although electric vehicles still struggle with range issues, they are faster and more efficient that traditional cars.

Despite the perfect score, Consumer Reports also pointed out some of the downsides of the P85D. Like any electric vehicle, it can be inconvenient to charge it every 200 or so miles. Despite the high cost of $127,820, reviewers said the car’s interior materials weren’t the most luxurious. Reliability has not yet been determined. Still, the perfect score bodes well for electric vehicles, especially as engineers work on improving battery technology and developing easier ways to charge vehicles, such as wirelessly or in owners’ homes.