Electric Rocks Could Save the Ocean 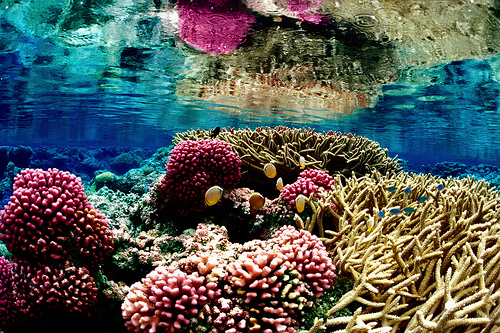 A local group on Gili Trawangan, a small Indonesian island, has been installing electrically-charged steel structures under the ocean for the last decade. The Gili Eco Trust was founded by Delphine Robbe, a French agricultural engineer who moved to the island in the early 2000s to become a diving instructor. Now 111 of the “biorocks” are spread along the coasts of three islands to protect natural resources that have been damaged by the country’s burgeoning tourism industry. Indonesia’s tourism industry has grown in recent years, and the surrounding reefs have been damaged by the influx of visitors and fisherman. Although disturbing the reefs is illegal, the laws are difficult to enforce. So, in order to protect and heal the ecosystem, the Gili Eco Trust has built artificial rocks.

The “rocks” are actually steel structures that are shaped like giant manta rays, dolphins, pyramids and more. A low-voltage direct current runs through the steel, and the electricity interacts with the minerals that are naturally present in the seawater. This reaction causes solid limestone to grow, and speeds up the normal reaction of coral growth. The limestone structures help slow incoming waves to prevent beach erosion. They also provide shelter for lobsters and juvenile fish, which has led to more biodiversity and better water quality. Volunteer divers even move injured coral to the biorocks for rehabilitation. According to the Gili Eco Trust, injured coral heals 20 times faster and is 50 times more likely to survive on the biorocks. After coral has healed it is returned to open sea.

Clearly, the project is working, but it is restricted by funding and limited energy resources in the developing country. Each biorock costs $2,270 USD to build, and the largest limitation is electricity, which comes from oil. To avoid using fossil fuel in the future, the Gili Eco Trust has experimented with using solar panels on floating barges, but unfortunately the panels were stolen. Now the team is working with local engineers to develop turbines to harness tidal energy. If it is successful, the project would use the ocean’s natural wave movement to power electric rocks that heal and protect the surrounding ecosystem.