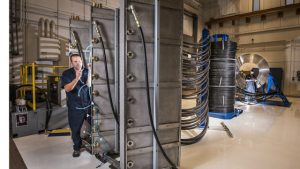 A team of electrical and mechanical engineers are building an efficient accelerator to study how materials behave at extreme pressures. “Thor’s magnetic field will reach about one million atmospheres, about the pressures at Earth’s core,” said David Reisman, lead theoretical physicist of the project.

The new accelerator, named Thor, is being developed in New Mexico at Sandia National Laboratories, a Lockheed Martin-owned research facility for the U.S. Department of Energy. Sandia is known for its Z-pinch machine, a powerful electrical generator that produces intense electromagnetic pulses. While Thor won’t be quite as strong as the Z machine, it will be 40 times more efficient, with less energy loss and a smaller design.

Thor uses hundreds of small capacitors, unlike the Z-pinch, which has a few huge ones. Sandia’s engineers compared this change to the evolution of computer architecture, “in which a single extremely powerful computer chip was replaced with many relatively simple chips working in unison.” The small but mighty Thor incorporates shoebox-sized units, known as “bricks,” which contain two capacitors and a switch. It will be built in stages, with stacks of 24 and 48 bricks being added in 2016.

By using many smaller capacitors, the design eliminates energy losses that occur with Z’s large capacitors. The new design also allows the researchers to precisely control pulses of electrical current that the machine generates. This is critical so that the materials being studied don’t get shocked while they are subjected to intense pressure. Reisman explained, “Individual cables from pairs of capacitors separate our signals. By combining these signals in any manner we choose, we can tailor very precise pulses of electrical current.”