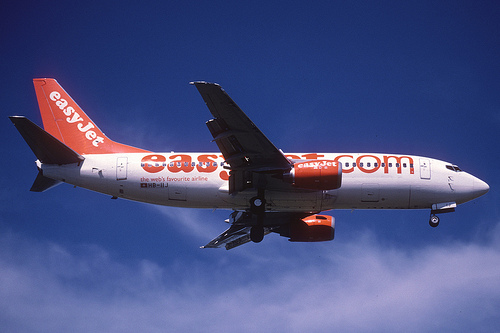 The European airline easyJet already embraces technology in several ways. They have paperless cockpits and use apps for organize ground crew operations or even to manage equipment changes in the case of bird strikes. The company recently announced three new technologies they are using to reduce the time it takes to inspect and repair aircraft.

After an event such as a lightning strike, engineers usually climb large platforms to manually inspect aircraft. EasyJet says that drones are a better, faster option. The company is working with Bristol University and British drone company Blue Bear Systems to test the technology. They have already demonstrated that a drone can fly around an aircraft to take pictures, and the next step will be to improve the drones’ cameras for higher resolution images. Drone inspections will begin as early as next year, but human engineers will remain involved by inspecting the images and giving final approval.

EasyJet will begin to use 3D printing to produce replacement aircraft parts ranging from arm rests to engine components. The goal is to reduce the storage of spare parts and speed up the replacement process. The company has already ordered engines that feature 3D printed parts such as fuel nozzles, carbon filter fan blades, and ceramic matrix composites.

The company is collaborating with Airbus to create a new automated wireless communication system to predict technical issues before they occur. The telemetry will collect information and send it to operations teams on the ground so they can troubleshoot and be ready for repairs as soon as the plane lands. It will also help schedule regular maintenance so that service can run as efficiently as possible.

EasyJet’s Head of Engineering, Ian Davies said, “The use of these emerging technologies frees up our engineering and digital teams to enable them to undertake more skilled tasks, keeping our costs down which in turn keeps our fares low, helps minimize delays and ensures that we maintain our industry leading punctuality for our passengers.”