Earth’s Polarity Could Change in Less Time than Thought 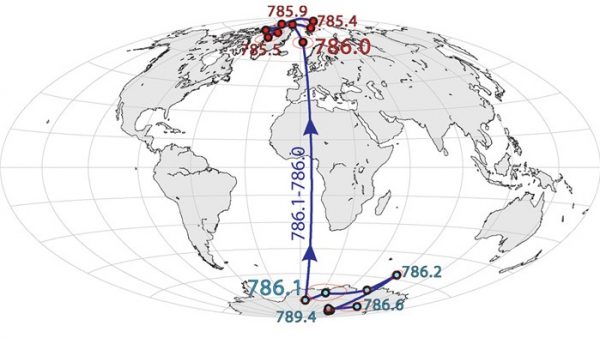 The scientists took measurements of the magnetic field alignment of sedimentary layers in a prehistoric lake in Italy. These layers show the alignment change of magnetic fields through the materials that were captured in sediment at a consistent rate over a 10,000-year period. The last magnetic field change is estimated to have occurred 786,000 years ago and is known as the Matuyama-Brunhes transition.

This research supports evidence that the Earth’s magnetic field intensity is decreasing at a rate of ten times faster than predicted, and a polarity reversal could happen in the few thousand years. The effects of a polarity change are unknown but could theoretically cause chaos with electrical grids or changes of electrical fields.

Read more about the research that estimates the time to change the Earth’s polarity is less than originally predicted.