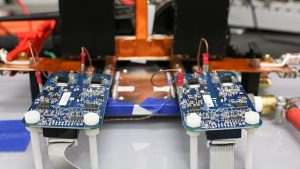 Researchers from Oak Ridge National Laboratory (ORNL) have designed and implemented a wireless vehicle charging station with 120-kilowatt capabilities. This is more than six times the power of earlier versions of this technology. Researchers believe the new station could dramatically improve charging times for vehicles.

The system is capable of transferring 120 kilowatts of energy at 97 percent efficiency. The numbers are comparable to those of high-powered fast chargers that are wired. During the demonstration under laboratory conditions, scientists demonstrated how power could be transferred across a six-inch gap of air. The power was transferred between a charged battery pack and two metal coils.

“We used finite element and circuit analyses to develop a novel co-optimization methodology, solving the issues of coil design while ensuring the system doesn’t heat up or pose any safety issues, and that any loss of power during the transfer is minimal.”

In order to achieve 120 kilowatts of energy, scientists had to create a new coil design. The coil was co-optimized with silicon carbide power electronic devices. This allows for a more compact, lightweight system. The system operates by taking energy away from the grid and converting it into high-frequency alternating current. This current generates a magnetic field that can transfer power across large gaps of air. After the energy has been transferred to the secondary coil, it is reverted back to direct current, where it is store in the battery of a vehicle.

Scientists relied on finite element as well as circuit analyses. These were used to develop the co-optimization methodology. They also ensured that the system did not run the risk of overheating, and reduced the chances of power loss during the transfer.

Scientists are working to achieve an extreme fast-charging system capable of delivering up to 400 kilowatts of energy in 15 minutes or less. But first, they will work to increase the power level to 200, as well as attempt to improve upon dynamic wireless charging technology.

The dynamic system allows cars to charge through wireless charging pads placed under the road. Engineers believe that this system would simplify charging, and keep people from having to waste time at charging stations. Scientists are working towards these goals, as well as streamlining and improving the current system.