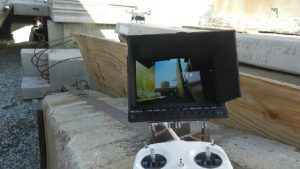 Drones, robots, and high tech devices are becoming staples in search and rescue missions. For example, when several earthquakes devastated Nepal earlier this year, drones used thermal cameras to detect any body heat that could indicate survivors who were buried under rubble. Now, a company called IntelliNet Sensors is developing a device that attaches to drones so they can detect the heartbeats and breathing of people who are trapped or hidden.

The patented system, called Lynx6-A, comprises a small HD video camera and a sensor that detects changes in the electromagnetic signature of an open volume of space. The sensor uses similar technology to Disney’s smart watch, which can identify objects based on the ambient electromagnetic noise they emit. Rescue workers would use a drone to land sensors in various points around a search area, and then the system would pick up on any electromagnetic signatures that could indicate breathing or heartbeats. It then converts the data into a graph that indicates the distance from a live person to the sensor.

“The rapid deployment within hard-to-reach areas allows first responders and law enforcement personnel to save many more lives in a highly stressful and noisy environment – a factor that traditional sensors are lacking.” said Dr. Fred Mohamadi, Founder and President of IntelliNet Sensors, in a statement.

The system is primarily designed for search and rescue missions, but it could also be used for military or border security operations, since it can detect people who are hiding in crates or even in underground tunnels. For now, the company is remaining elusive, with a minimal website that doesn’t give any details about anticipated pricing or availability, and a non-disclosure agreement being required for all inquiries.