Drones Can Autonomously Navigate Through Traffic 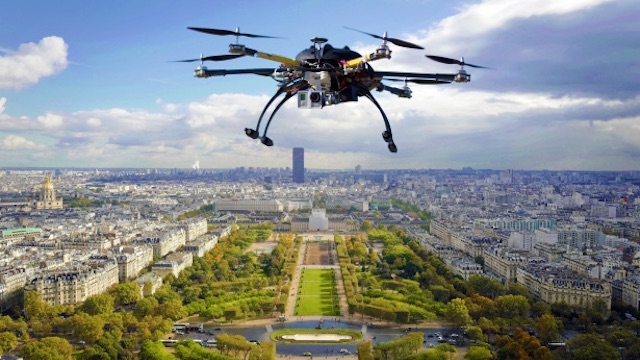 Scientists from the University of Zurich and the National Research Competence Center NCCR Robotics have created an algorithm that allows drones to navigate busy city streets. These drones are capable of responding quickly to changes in traffic, avoiding cyclists and drivers alike as they speed between buildings in major cities.

Known as the DroNet algorithm, the network creates two outputs for each image input. One image is used for navigation purposes, while the other registers the collision probability of various situations. This information allows DroNet to avoid crashes and other complications, allowing the drones to go about their business even in the hustle and bustle of busy cities. Scientists believe that this technology brings us one step closer to having autonomous drones integrated as a regular aspect of daily life.

The secret to this new technology is simplicity. The drone relies on normal cameras, similar to those found in smartphones. What sets it apart is the artificial intelligence algorithm behind it. The AI observes and evaluates situations that arise for the drone, and works out the best way to handle them. Called the ‘Deep Neural Network,’ the AI learns to deal with complex problems by training and testing. From there, the artificial intelligence can handle and respond to a variety of crises and situations.

The real challenge was collecting the best training examples for the artificial intelligence. Scientists had to research and assemble thousands of rides from cars and bikes traveling through the urban environment. From these, the AI was able to understand and grasp the concept of travel and basic traffic laws. The drone mimics these moves, learning to travel safely and effectively through real-time traffic.

Through their work, researchers were able to create a drone perfectly capable of navigating through roads. Perhaps more significantly, their drones are able to adapt to changes in the environment. Whether dealing with a detour, construction site, or crowds of pedestrians, the drone was able to make necessary changes in their path to avoid any issues or collisions. This extends even to situations the drones were never trained for; by calling on knowledge they already possessed due to deep learning, the drones were able to construct reasonable and effective work-arounds.

This is all exciting news for the future of drones, but it is just one step of many. Researchers say there are many more obstacles to take on before drones become a regular part of daily life in the urban jungle. Still, this is a significant step towards making this dream a concrete reality.