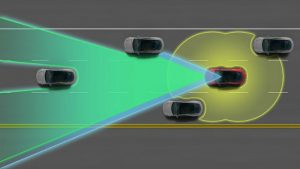 Two people are claiming that their Tesla Model S vehicles crashed because of rogue autonomous features. Tesla has started equipping its new models with radar, cameras, and sensors to enable autonomous driving for its luxury electric vehicles. The plan is to slowly add new autonomous features over time, while cautiously reminding drivers that they are still ultimately responsible. Now two separate Tesla owners are blaming the Model S’s automated features for crashes that occurred just days apart. In both cases, Tesla disputes the claims and asserts that the drivers are at fault.

On April 26, a woman named Arianna Simpson was cruising in autopilot mode on a California highway when the car ahead of her suddenly stopped. She told Ars Technica, “There was a decent amount of space so I figured that the car was going to brake as it is supposed to and didn’t brake immediately. When it became apparent that the car was not slowing down at all, I slammed on the brakes but was probably still going 40 when I collided with the other car.” Tesla disagrees, saying that vehicle logs show that before the crash, Simpson hit the brake pedal, which instantly returned the car to manual mode and disengaged the automatic emergency braking system.

Similarly, a Utah man says that on April 29 his Model S drove itself into a trailer. Jared Overton claims that he parked his car, walked away, and returned to find that it had wedged itself under a parked trailer. He reported the issue to Tesla, which replied one week later with a letter stating that the vehicle’s incident logs show that the accident was caused by Overton initiating the Summon feature, which allows the car to park itself while the driver is outside the vehicle.

Summon lays important groundwork for an increasingly autonomous world. One where the convenience and safety of transport vastly exceed what we are used to today.

Fortunately, neither incident resulted in any serious injuries. They are both cases of a driver’s word against Tesla’s incident logs. Safety and liability will likely continue to be hot topics as more vehicle manufacturers continue to release autonomous vehicle technology.