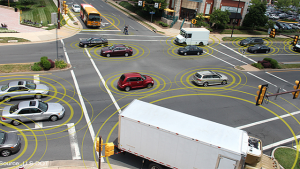 The U.S. Department of Transportation (DOT) is running a connected car pilot program in three regions, with the ultimate goal of spreading the technology across the country. Calling the pilot “a big step forward for the future of how we move in this country,” Transportation Secretary Anthony Foxx made some bold claims about the ways in which this technology will improve safety, the environment, and our overall quality of life.

The $42 million pilot project involves equipping vehicles and infrastructure with sensors that connect with software to warn drivers about safety hazards and traffic jams. By 2017, the DOT plans to add sensors to traffic lights and roadside units, as well as 10,000 vehicles in New York City and more in Florida and Wyoming.

Connected cars could reduce the unimpaired crash rate by 80 percent, according to the DOT. The department says that Left Turn Assist technology, for example, could prevent up to 592,000 crashes per year by warning drivers not to turn left when another vehicle is traveling in the opposite direction. Apps can also warn drivers in real time about cars breaking ahead, blind spots, and vehicles running red lights. In addition to making the roads safer for drivers and pedestrians, the DOT anticipates that connected cars will reduce greenhouse emissions, presumably by enhancing traffic flow and therefore reducing the time that cars spend idling.

While $42 million and more than 10,000 vehicles may sound ambitious, the DOT says this is just the beginning. In August, the Department announced a proposed rulemaking that would require connected car technology in all new vehicles. So, the first step is a pilot, followed by widespread use of sensors, and finally, autonomous vehicles.