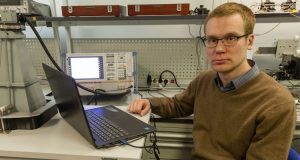 Engineers from the St. Petersburg Electrotechnical University “LETI” have created a new dynamic way to control electromagnetic compatibility. The technique relies on using common radiation-absorbent fillers to create a new composite, which is based on conductive polymer polyaniline.

Researchers happened on the compelling idea of using a dielectric polymeric composite film made of gelatin as part of their design. This film contains distributed absorbing electromagnetic radiation particles.

Additionally, this new technique allows engineers to apply the material directly onto electronic circuit boards that have already been completed. This is due in part to the material itself being dielectric, which prevents a short circuit between the various components. Also, the temperature of the application comes in at 60 degrees Celsius, making it easy to incorporate the material with completed electronics.

“Thanks to the simple low-temperature method of application of developed composites, absence of through conductivity, and low dielectric permittivity, they can be applied directly to electronic printed circuit boards. They can also protect the components placed on them from RF interference from industrial and domestic sources, including signals from cellular network stations, digital television, wireless Internet access points.”

Kamil Gareev, Associate Professor of the Department of Micro- and Nanoelectronics of ETU “LETI.”

While these are all exciting developments, researchers have a lot more testing of their new technique before they can start to think about mass production. At this point, engineers are intending to conduct tests in which they apply layers of their new composite directly to a variety of different electronic circuit boards. From there, they will be able to assess the composites resistance to the impact of environmental factors, including temperature and humidity. They will also be able to determine how the composite reacts to different frequencies of electromagnetic interference and vibration.

The next step for the team of scientists is patenting their technologies. They will then continue to investigate different applications for their work.