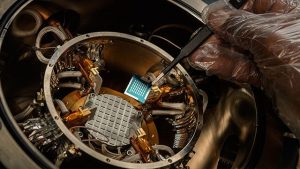 Experts believe the material is capable of functioning in temperatures of up to 428 degrees Fahrenheit (220 degrees Celsius). This could prove a major game-changer for commercial electronics, which typically do not fare well during extreme highs and lows in temperature.

“Commercial electronics operate between minus 40 and 85 degrees Celsius. Beyond this range, they’re going to malfunction. We created a material that can operate at high temperatures by blending two polymers together.”

One of the new materials serves as a semiconductor; the other is a traditional insulating polymer. One of the plastics is responsible for transporting the electrical charge, while the other possesses the ability to withstand extremely high temperatures. These two plastics are blended together at a very specific ratio so they complement each others’ traits.

In order for the blend to be function, the two materials must be used in roughly the same ratio. This allows for an organized, interpenetrating network that lets the electrical charge flow evenly throughout the device, while at the same time maintaining shape and structure despite extreme temperatures.

Perhaps most remarkably, the new plastic material is able to maintain performance no matter the temperature. In most commercial electronics, the ambient temperature can have a direct impact on performance. The hotter it gets, the slower a device works. However, the new polymer blend changes all that. It is capable of remaining stable through extreme highs and extreme lows in temperature.

Scientists believe this new technology will have countless applications. It will be extremely useful for researchers traveling in inhospitable climates, ensuring their technology is fully functional no matter the weather. But regular consumers can enjoy the benefits of this new polymer as well; it could be used to help ensure cars and airplanes don’t get overheated, and could even be used in car sensors to track fuel consumption.

Researchers will continue to investigate the new polymer to determine its true temperature limits. Scientists hope to then commercialize the material and begin applying it to various devices and technologies.