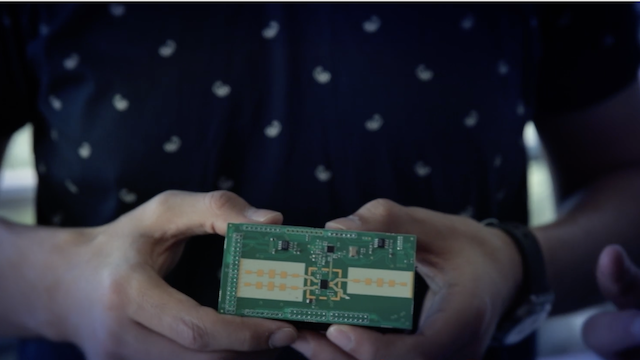 Scientists from KAUST, in collaboration with VTT Technical Research Center of Finland, have designed a new type of powerful radar that is small enough to carry and accurate enough to detect objects in real time. Experts believe this new design will have multiple applications, from helping the visually impaired to ‘see’ to improving the accuracy of unmanned automobiles.

Radar operates by providing comprehensive information about moving objects, from their size and shape to the distance and speed at which they travel. Unfortunately, close-range applications demand that the transmitted radio waves have shorter wavelengths. This allows them to capture as much detail as possible, providing people with a comprehensive image of the object.

“Current radar modules are large and bulky. They also lose out on key details because they operate using long radio wavelengths. We wanted to develop a low-power, portable radar. Colleagues at VTT brought the necessary experience in millimeter-wave and hardware design, while I focused on the signal processing side and developed modular radar software.”

Scientists designed a radar that performs eight scans per second; the earliest prototype was capable of only one scan every two seconds. The additional scans and frequency allow for the creation of a far more detailed radar image. The new technology incorporates frequency-modulated continuous wave radar. This type of radar creates continuous pulses of millimeter-wavelength radio waves. The frequency of these waves varies during the course of every single pulse. Thanks to the small size of the waves, scientists can get a far more accurate idea of the distance of the object, as well as the speed at which it is moving.

To keep the size of the system small and easy to transport, scientists opted for an operating frequency of 24 Gigahertz. Because of this, researchers could easily reduce the size of the microstrip antenna. Add in one transmitting and two receiving antennae, and you end up with a device that can effectively estimate the angular location of a specific target.

Scientists are working to improve upon their design and make it even more powerful and effective. They believe their work could prove useful in unmanned robotic and quadcopter applications, as well as in vehicles that use collision avoidance systems.