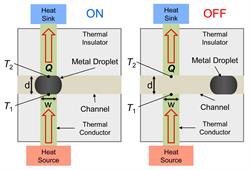 Courtesy University of Illinois at Urbana-Champaign

Scientists from the University of Illinois at Urbana-Champaign have invented a new way to switch heat flows on and off. This could prove an enormous benefit for electronics systems, particularly those where controlling heat can have a drastic effect on the system’s reliability and overall performance. This research originally appeared in Applied Physics Letters.

But switches for heat flows have long presented a problem for scientists. While they would be a major benefit when it comes to maintaining and controlling a variety of systems, there are numerous challenges and roadblocks that have prevented the idea of the heat switch becoming a reality.

William King, the Andersen Chair Professor in the Department of Mechanical Science and Engineering and the project co-leader

Scientists used a system modeled after modern electronics systems to demonstrate this new heat switch technology. A heat source representing the power electronics component was on one side of the switch. On the other they placed a liquid cooling system designed for heat removal. When they flipped the switch, scientists were able to successfully extract heat at more than 10 W/cm2. Once the switch was turned on, the heat flow dropped by an astounding 100X.

The next step in their research is to find a way to successfully integrate the new heat switch with power electronics. The switch will be integrated with electronics that rely on a circuit board for starters. Scientists believe they will have a fully functional prototype later this year. Should their efforts prove successful, this little switch could be the big change in electronics that scientists have been searching for.