Dell to Acquire EMC for $67 Billion 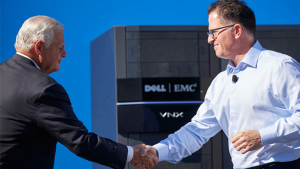 In the largest ever tech acquisition, Dell and partners Silver Lake and MSD Partners will buy EMC Corporation for $67 billion. The deal creates the world’s largest privately controlled, integrated technology company. Although some industry experts have called the merger a big gamble, it also makes sense for two companies in complementary segments of the computer industry to combine forces. While Dell has focused mostly on computers and servers, EMC specializes in cloud storage.

Our new company will be exceptionally well-positioned for growth in the most strategic areas of next generation IT including digital transformation, software-defined data center, converged infrastructure, hybrid cloud, mobile and security.

The agreement specifies that VMware—a large part of EMC that specializes in virtualization technology for cloud computing—will continue to be a separate publicly traded company. However, for the first time since EMC started in Massachusetts in 1979, it will become private, as part of Dell. EMC shareholders will receive $24.05 per share in cash, as well as tracking stock related to the VMware business.

“I’m tremendously proud of everything we’ve built at EMC – from humble beginnings as a Boston-based startup to a global, world-class technology company with an unyielding dedication to our customers,” said Joe Tucci, chairman and chief executive officer of EMC. “But the waves of change we now see in our industry are unprecedented and, to navigate this change, we must create a new company for a new era. I truly believe that the combination of EMC and Dell will prove to be a winning combination for our customers, employees, partners and shareholders.” The deal is expected to close in mid-2016 and will be subject to regulatory approval.