Our last days in Diyarbakir were relaxed and uneventful; we wrapped up the final data collection and loaded up the equipment to ship back to the US. We packed the battered antennas, cables, equipment and bits (road gear takes a beating) into the shipping cases and stepped outside to snap a quick picture in front of a radome (Mustafa and Ibrahim here). 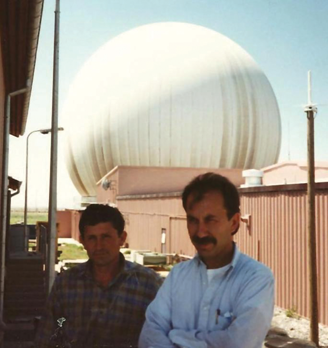 In a few years hence, Pirinclik would be dismantled, a casualty of the end of the Cold War, if you could call it a casualty.

We had a few hours to kill so we took the tourist walk around the ancient city.

Frosty was a novelty in cowboy boots, jeans and a white T-shirt emblazoned with a picture of Carlos Santana. We were followed for 20 minutes by a gaggle of kids squealing “Hello Yankee! Hello! Hello!” 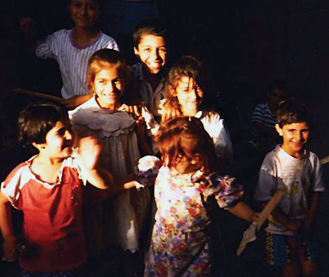 These guys were the most effervescent, doing splits and cartwheels in the square. We offered them some small change, but they wouldn’t take it. 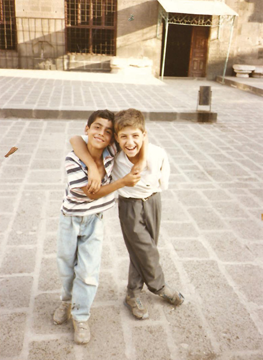 Another stop was at one of the few Catholic churches in the city, left over from the Crusades, I suppose, but still as well preserved as any of the old buildings in the area.
We walked in just as a few of the faithful were gathering for an afternoon service. 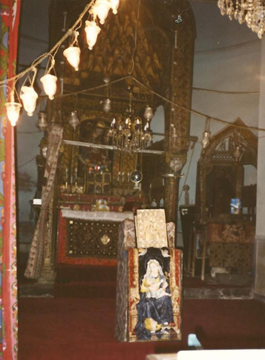 After our lightning tour of the old town (I guess everywhere is old town there), we headed over to Ibrahim and Mustafa’s apartment for a beer. The four-story apartment building in the middle of town didn’t have an elevator, as many buildings in Diyarbakir. We trudged up the sixty steps to the top level.

“It’s good to be on the top floor.” Mustafa said. “Less noise from the street up here.”

We reached the top of the stairs and turned down a hall lit dimly by a small window at the far end. We stopped at the first door. Ibrahim took a ring of keys out of his pocket and opened a heavy padlock that was bolted between the door and the frame. He then clicked open another pair of deadbolts, the sound of the lock clanking and echoing down the empty hall.

The apartment was not unlike a typical male college dorm room, except maybe a little more forlorn. Bare walls, beaten carpets. A threadbare couch was arranged in front of a small TV set that sprouted a bent coat hanger from a stub of an antenna. An unmatched set of four kitchen chairs were arrayed around a small table, a book balancing up one of the wobbly table legs.

Frosty looked around and asked: “Nice. Who’s your decorator?”

“Very funny. Three more days here, then we go back to Ankara—for good.” Mustafa said turning into the dingy kitchen. A half-size refrigerator, round and ancient and humming loudly was the only appliance. The door was held shut with tape. Mustafa gingerly pulled the tape back and opened the refrigerator. A sweet musty smell hit our faces.

What the heck. We each took a bottle of Efes Pilsen; Mustafa handed us a pair of side cutters and we popped the tops off the slightly-cool brews. Frosty’s beer ran over the top of the bottle and he slurped it quickly to calm the foam…and not waste any.

We sat for an hour watching Turkish television which featured an excessively dramatic soap opera of some kind. The only other channels were a continuous chanting of a mullah and a talk show of some kind; the set looked like it was in the bedroom of a house, complete with colorful curtains. An old grey typewriter was a table prop. I guess they were trying to look journalistic.

Ibrahim, this looks like secular TV. Not religious stuff.

“Sure. We have all kinds of western TV here. Do you want to watch Gunsmoke? It is very popular in Turkey. It comes on at—“ He broke off. “Hey Mustafa, what time is Tüfek-Duman?”

It was getting just past six p.m.; it had been an exhausting trip already so we demurred.

We’ve got an early flight tomorrow; thanks anyway.

We said goodbye to Mustafa, nursing his third beer on the couch, watching the TV and piling up butts in a hubcap that served as an ashtray. Ibrahim took us back to the hotel and dropped us off without getting out of the car. He was tired, too.

We woke the last morning in Diyarbakir and met for breakfast; we had to leave in an hour to go back to the airport. In the dining area of the hotel, breakfast was laid out, buffet-style: a variety of cheeses, cucumbers, cantaloupe, plain yogurt and thick hard bread. Coffee cooked on an electric burner. Green flies buzzed in abundance around the room and landed on the uncovered plates. A pair of squeaking ceiling fans turned lazily overhead, futilely shooing the flies away.

We shrugged and picked up a plate and grabbed some cheese and bread. Best to stay away from the fresh vegetables, although it was about that time that the malady we nicknamed “Atatürk’s Revenge” started playing in our guts. It was gonna be a long flight home, but first we had a few nights in Istanbul.

Mustafa arrived, we loaded our suitcases into the car and headed to the airport, past the chickens and goats and mud and thatch shacks, boarded a shiny new airplane and flew away from Diyarbakir. Things here would change in a few years, but many things about life would remain the same for a long time. 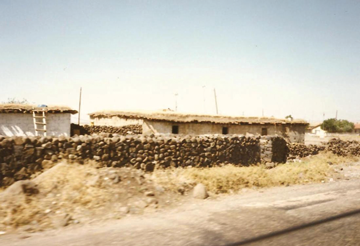 Arriving in Istanbul—crucible of east meets west—one is struck by the jumble and mix of buildings, architecture, traffic and street sounds competing for the senses. Gyro stands line street-corners with inverted conical stacks of beef and lamb, rotating and roasting and testing one’s will to resist. Fresh pita with onion, tzatziki and tomatoes, wrapped in square of wax paper, all for a dollar and served up in an Istanbul minute.

Minarets pierce the skyline of the city that rings the Bosphorus, the watery connection between Europe and Asia.

Churches are spread about the city. When Constantinople became Istanbul, the Christian buildings weren’t reduced to rubble, but the minarets were built just a little higher, closer to God and further away from the noise and rumble of the street. 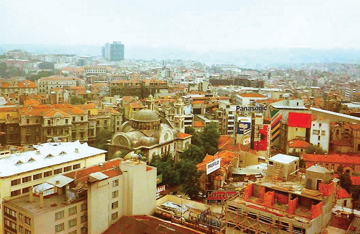 A nice hotel is our good refuge from the unfamiliar, and ours featured a good bar with a twinkling view of the lay of the city.

Sorry, man, it’s been a lot of moving around; my guts are in a Mixmaster.

I left him at the bar, more lonely than miserable, I suppose. We’ll try tomorrow…which dawned early, the faithful called to prayer by loudspeaker atop the many mosques, each competing, it would seem, for the biggest draw. At six in the morning, it is a mournful cry, supplicants gathering to pray. I stuffed my face in the pillow for a few more moments, and then arose. One day in Istanbul; I should make a full day of it.

“I want to buy a fez and an outfit for my lady,” Frosty announced. “It’ll be fun to play ‘Harem’.” He winked.

We finished breakfast and headed for the Grand Bazaar of Istanbul, a timeless place, rivaling any market on the planet with over 50 covered streets and four thousand shops.

We plunged in. The merchants were out, vigorously pushing merchandise like their lives depended on it, which they probably did.

Diving into the bazaar at Istanbul is like entering the shopping netherworld. The city has literally grown up and around the ancient market (the original street-level markets plunge a story or more beneath the city), but the sounds, smells and seductions are the same as in millennia past. 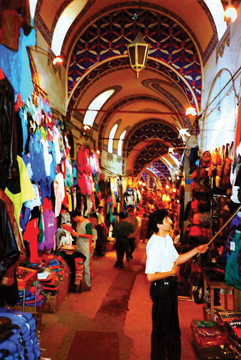 “Tea?” One is beckoned from shop after shop. “Carpets? The best. Come see.”

“No! I want a belly dancing outfit.” Frosty kept repeating to quizzical faces. “And, you know, one of those funny hats.” He pointed to another customer who was inspecting some of the jewelry across the aisle.

“You know, scarves and a…” He made a motion with his hips I can’t replicate, nor repeat, but it certainly spoke “Harem lingerie.”

Finally a young man said. “Ah, yes. I know. Come, here. Take this card. It is my cousin. The best stuff. You will like it. I guarantee.”

He produced a yellowed business card. It said, simply:

“HASSIM—BEST TRADE” and an address in the bazaar. A phone number was written in pencil on the back of the card.

“Take me there!” Frosty said excitedly.

We walked through the bazaar. Frosty found HASSIM—BEST TRADE, selected a diaphanous outfit for his lady, and baggy pants and a fez for himself.

Sure. Please spare me the details.

After HASSIM—BEST TRADE we schlepped our stuff around for a while (Yes, I did buy a carpet, just a small one. How can you refuse?) and finished out our experience at a T-Shirt stall, picking up some souvenirs for some and ourselves.

We arrived at the hotel, pulling our bags from the cab. Something was missing.

“My fez! My girl’s costume!” Frosty was in a panic. He had left a bag with his prizes at the bazaar.

Dude, the place closes at eight. It was then eight-thirty. The bazaar is closed. Frosty was distraught. What better way to say ‘I Love You’ than a sheer nightie and a fez?

“Don’t wait for me, man. I’m going back tomorrow morning. I’ve got to get my stuff.”

Sure. Get your fez. I’m getting on the flight home. (Ataturk kept reminding me that it was time to leave.)

Later, we settled in at the bar to commiserate Frosty’s loss.

Alright Frosty: you’ve had a bad day, let’s head out.

We took a cab to a nearby disco, humming with loud music, young Turks and their girls. The place smelled of blunted danger. We ordered drinks and settled in for a look at the local fauna. Before long, Frosty got re-animated and headed over to a couple of young chippies. Uh-oh. He chatted some up in the universal language.

Before long—maybe about two minutes—the local guys swarmed in around Frosty and started a row.

It didn’t matter, at that point, what language was being spoken, Frosty had intruded. Intruders need to be repelled. Engineering teaches one how to mitigate problems and often one has only the resources at hand. So taking my right hand, I grabbed my traveling companion by the left shoulder and pulled him back out of the fray and out on the street, aptly executing what one could describe as the latter of the ‘fight or flight’ responses.

We hopped a cab and returned back to the hotel. The next day, we boarded our return flight to the US. The fez and belly-dancing costume were absorbed back into the bazaar, forever lost. Frosty was gloomy as we flew through de Gaulle and back to Dulles (Frosty tried for an hour to call the number on the back of HASSIM—BEST TRADE while in the Paris airport. No luck).

Back home, safe and sound and fortified with Imodium, I called and chatted with Frosty’s manager.

Steve laughed when I told him the story about the near-miss at the bar.

“Sounds familiar,” he chuckled. “You know, he has another nick-name.”

“Well, one time, he had to climb down the outside of a three story balcony because he had been, er, surprised at someone’s girlfriend’s house. He scrambled down with nearly no clothes on.” We laughed.

“That’s when he picked up the name Spiderman.”

Mike Violette is President of Washington Labs and Director of American Certification Body. He hasn’t been back to Türkiye, but would do so in a heartbeat, this time sans Spiderman.

Special Thanks to Cigdem Avni for help with Turkish translations.