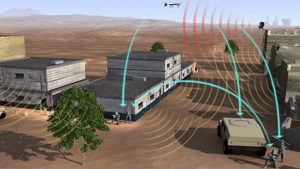 Just like the rest of the world, battlefields are becoming increasingly digital, which leaves the United States military clamoring for space in a crowded electromagnetic spectrum. So, to prevent interference or intentional signal jamming, DARPA, the Pentagon’s research agency, has now created an incredibly fast chip to equip the military for electronic warfare.

The new device is an analog-to-digital converter (ADC) that can sample radio frequency signals in the battlefield and convert them to digital data that a computer can analyze and manipulate. While ADCs aren’t new to the battlefield, DARPA’s latest chip can convert data at a rate of over 60 billion times per second, a processing speed nearly ten times faster than commercially-available alternatives.

The faster speed makes it possible for the ADC to detect and analyze signals in a wider range of the spectrum (anything below 31 gigahertz). Today’s slower ADCs can only process data within a select portion of the spectrum, but the new ADC can handle the important part of the spectrum that covers radar, communications and electronic warfare signals.

The massive amount of data generated—nearly a terabyte every second– poses a whole new challenge. The on-board signal processing uses too much power for the ADC to be practical in the battlefield. DARPA is partnering with GlobalFoundries, a semiconductor manufacturer that supplies the chip’s 32 nm silicon-on-insulator (SOI) technology. Future iterations of the will use 14 nm SOI technology, which DARPA says will “reduce the ADC’s power consumption by 50 percent and enable yet smaller and lighter systems that can sample even greater swaths of the spectrum.”