Cyber Capabilities on the Future Battlefield 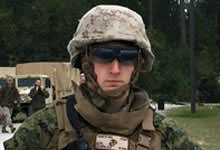 The Office of Naval Research (ONR) has developed a tactical cyber range to prepare fighters to perform cyber and combat operations simultaneously on the future battlefield. In pursuit of information dominance, these new technologies will prepare cyber personnel to coordinate cyber and electronic warfare actions in support of larger operations.

During a recent training demonstration combined technologies included networking, communications, sensors, unmanned systems, and augmented reality technology to emulate and navigate an urban combat scenario. Marines wore a pair of augmented reality glasses that streamed relevant data while still allowing for awareness of surroundings and the ability to perform operational duties. This information helped them to navigate the noisy adversary communications and make tactical decisions in support of mission objectives.

“The Augmented Reality glasses allowed me to perform and prioritize multiple tasks while conducting our missions. I can envision every Marine wearing this technology on the battlefield of the future.”