Cree, Inc. and Delta Energy Systems announced a breakthrough in the photovoltaic (PV) inverter industry with the release of Delta’s new generation of solar inverters, which utilize SiC power MOSFETs from Cree.  The use of SiC MOSFETs in the next-generation PV inverters can enable significant new milestones in power density, efficiency and weight. 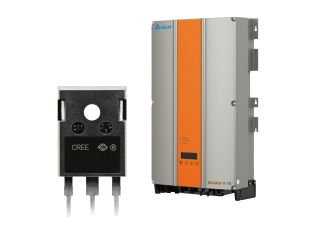 “The next-generation PV inverters from Delta are designed to set a new milestone of power density by utilizing SiC MOSFETs,” commented Mr. Klaus Gremmelspacher, head of research and development for PV inverters at Delta Energy Systems.  “The SiC MOSFETs from Cree were essential for us to realize our goals for new, high-power inverters that are lightweight and have industry-leading efficiency.”

Cree released the first silicon carbide MOSFETs, used for their ability to cut losses and allow PV inverters to run at higher efficiencies and higher power densities, in 2011 and a dramatically improved, second-generation SiC MOSFET in 2013.  Now, as a milestone product announcement, Delta Energy Systems, a subsidiary of Delta Electronics Group, one of the world’s largest and most respected providers of power management solutions, has incorporated Cree® SiC MOSFETs into its next-generation solar power inverter.  Utilizing 1200V SiC MOSFET’s from Cree in an 11kW PV inverter, Delta has already been able to extend the DC input voltage range while maintaining and even increasing the maximum efficiency of its previous products.  The Delta 11kW booster, which employs Cree’s SiC MOSFET and now has 1kV DC input instead of 900V, is targeted for release in Q2 2013.

Dr. Scott Allen, senior director of marketing, Cree Power, remarked, “We are pleased and honored to have Delta Energy Systems as a customer for our SiC MOSFET.  They are utilizing the 1200V, 160m-Ohm MOSFET, which has matured rapidly since its release in 2011 and offers industry-leading performance and cost.  Advanced technology customers like Delta are now moving aggressively forward with our SiC MOSFET technology, which enables reduced size, weight and cost for PV inverters, from 20 to 50% when compared with silicon, while at the same time maintaining or increasing efficiency.”