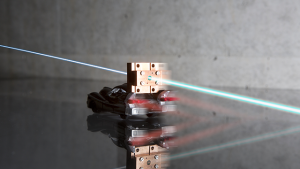 Scientists from DESY have successfully created a miniature particle accelerator. Made for electrons, this accelerator is capable of performing four separate functions. Powered by a Terahertz radiation source, this experimental device can accelerate, focus, compress, and analyze electron bunches in a beam.

The miniature particle accelerator is astonishingly small; the active structures add up to just a few millimeters in width. While the size is impressive, it’s the multiple functions of the accelerator that are truly remarkable. Its electron beam has perfect timing, a feat accomplished by using the same laser pulse to both generate an electron bunch as well as drive the device.

“For instance, a bunch that hits the negative part of the Terahertz electric field is accelerated. Other parts of the wave lead to focusing or defocusing of the bunch or to a compression by a factor of ten or so.”

The device also gives scientists the ability to analyze the structure of the electron bunch as it moves. Known as streaking, this technique involves an incoming electron bunch being deflected sideways. This deflection results in the bunch being smeared out perpendicular to the direction of flight. As the bunch hits a detector, it creates a profile of the electrons as the move. This method is used to provide comprehensive analysis of bunch structures within particle accelerators. The device is also capable of combining several of its units to perform multiple functions.

The device and all related technology remains in the experimental stage at this juncture. Researchers believe that this device could signify the beginning of small, Terahertz driven particle accelerators being regularly utilized. Further research is still required before commercialization can be considered viable, but for now scientists are certain that they’re on to something extraordinary.