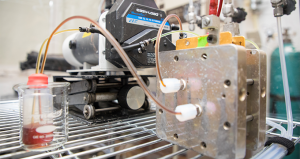 Researchers from Harvard University have successfully demonstrated the longest-lasting high-performance organic flow battery known to man. Known as the Methuselah quinone, the powerful molecule could be used to store and release energy tens of thousands of times over several years. Experts believe that this molecule could be the key factor in creating batteries with long-term stability and power.

Nicknamed after the oldest figure in the Bible, the Methuselah quinone is the result of various experiments and years of research. Quinones are abundant and naturally occurring; they are vital to such biological processes as cellular respiration and photosynthesis. By working with chemists, researchers were able to characterize the degradation process of previous quinone molecules. This process was transferred into flow batteries, where modifications were made so as to increase the longevity of the device.

“We designed and built a new organic compound that can store electrical energy and also has a very long life before it decomposes. We discovered degradation processes of the molecules that we previously used in flow batteries. Then we created new, more stable molecules that avoid these problems.”

Previously, scientists had successfully demonstrated similar chemistry with a long lifespan. Unfortunately, the chemistry was saddled with a low voltage, which resulted in low energy storage per molecule. The new iteration of the design builds on previous versions, resulting in a product that comes in at more than one volt. Because of this small but vital difference, we could very well see this organic-based flow battery become commercialized.

The Methuselah molecule’s long life comes as a result of its fade rate. That rate comes in at less than 3% degradation over the course of a year, making it usable for literally tens of thousands of cycles. Additionally, the molecule is highly soluble. That allows it to store a greater amount of energy in a smaller space. The cost of the battery is even further reduced by its inexpensive components. The end result is a low-cost, high-functioning battery that could be perfect for long-duration discharge.

Scientists believe these batteries are a major step forward when seeking out green, renewable energy. Should the device become commercially viable, it could significantly help the electric grid absorb larger amounts of green energy.