Engineers from the University of Utah have created a new type of camera that doesn’t require a lens to function. The new design allows for a regular pane of glass to be transformed into the lens of the camera. While traditional cameras operate off the idea that people see and decipher pictures, the new model instead involved a computer running an algorithm to ‘see’ the images.

Traditional cameras just don’t work without the aid of a lens. Without them, images are blurry and unfocused. However, those blurred images still have all the data necessary to detect the object in question — provided there’s a computer program trained to identify it. 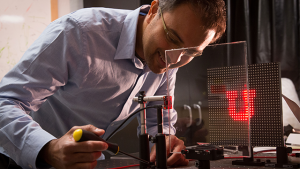 Researchers tested out this theory using a picture of the ‘U’ from the logo of the university. They also used an animated video of a stick figure. The photo and video were displayed on an LED light board. Researchers took standard consumer camera sensor and connected it to the side of a plexiglass window. The sensor was pointed into the window. Meanwhile, the light board was placed in front of the window, situated at a 90-degree angle from the sensor. Aided by a computer processor running the algorithm, scientists ended up with a distinct, if low-resolution, image. This method can also be used to create full-motion video and color images.

Scientists used reflective tape as an aid, which was wrapped around the edge of the window. The vast majority of light that comes from the object show in the picture has to pass through the glass. However, about 1 percent scatters through the window, heading into the camera sensor. This light allows the computer algorithm to decode the image in question.

Researchers believe that these simple-but-clear images have a wide variety of applications. They would prove a huge help to obstacle-avoidance sensors in drones and autonomous cars, for example. But with further research and streamlining, scientists are confident that they can produce even crisper images.

There are an abundance of applications this technology could be used for. Augmented reality goggles and other AR technologies could be made less bulky and more streamlined. Security cameras could be placed directly into the windows of homes and businesses. There’s even the possibility that this technology could lend itself to the biomedical field, including retina or biometric scanners.