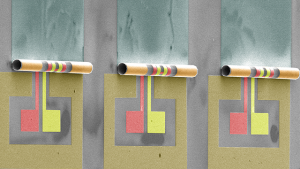 Engineers from the University of Illinois are hard at work devising smaller, more efficient radio frequency transformers. These devices are an integral part of the Internet of Things; unfortunately, they’re also one of the most problematic. Their infamously large size has impeded the miniaturization of technology in this field — until now.

Researchers are working on 3-dimensional rolled-up frequency transformers. This design takes up 10 to 100 times less space than conventional models. They also perform better as the power transfer ratio increases. Additionally, they have a simpler fabrication process than the 2-dimensional versions commonly being used.

“Transformers are one of the largest and heaviest elements on any circuit board. When you pick up an LED light bulb, it feels heavy for its size and that is in part because of the bulky transformer inside. The size of these transformers may become a key obstacle to overcome in the future for wireless communication and IoT.”

Xiuling Li, a professor of electrical and computer engineering

Transformers operate thanks to coiled wires, which are used to convert input signals into specific output signals. These signals are used in a plethora of devices, including microchips. Engineers have tested out stacked conducting materials in an effort to solve the issue of space, but unfortunately, these models only have limited potential due to the inefficient magnetic coupling between coils.

The new transformer model seeks to solve the issues that plagued previous attempts. It creates 3-D structures using 2-D processing. Carefully patterned metal wires are placed onto stretched 2-D thin films. After the tension is released, the 2-D films will automatically roll themselves into tiny tubes. This allows the primary and secondary wires to coil inside each other in a very small area that is ideal for magnetic induction and coupling.

The structure of the nested coils results in high turns ratio coils. These rolled transformers can process and receive higher frequency signals than other, larger devices.

“A high turns ratio transformer can be used as an impedance transformer to improve the sensitivity of extremely low power receivers, which are expected to be a key enabler for IoT wireless front ends.”

The next step for these engineers will involve using thinner and more conductive metals in the design. This could potentially result in even smaller, more flexible transformers. With further research, the devices could even be woven into fabric to support high-tech wearable technology.