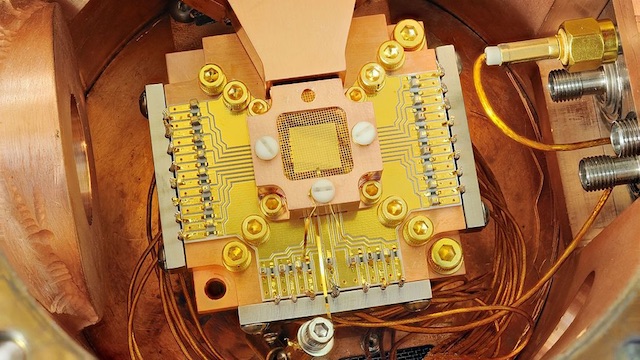 Scientists from the Department of Energy’s Lawrence Berkeley National Laboratory have unveiled a remarkable new method for creating quantum machines out of basic semiconducting materials. This new technology could help to dramatically increase the reach of quantum devices across countless fields, and could even change the way we look at physics forever.

“This is an amazing discovery because we didn’t think of these semiconducting materials as strongly interacting. Now this work has brought these seemingly ordinary semiconductors into the quantum materials space.”

Scientists discovered that if they stack together 2D layers of tungsten disulfide with tungsten diselenide, they could create an entirely new type of intricately patterned material. This type of formation is known as a superlattice. The materials used are just a single atom in thickness, which scientists can adjust as needed to create microscopically small devices. Scientists then took the lattices from the different 2D materials and combined them into a well-aligned, nearly identical pattern known as a moire superlattice.

Earlier experiments have proven that combining certain 2D materials, such as graphene, can result in the creation of unique quantum physics, including superconductivity. Scientists were determined to see if combining tungsten disulfide and tungsten diselenide could produce a similar effect. Once combined, researchers saw that the two materials created twist angles between their various layers. These angles can be used as ‘tuning knobs,’ allowing scientists to transform the semiconducting systems into quantum materials that come with electrons that are highly interacting.

The materials were fabricated using a polymer-based technique. This technique involves picking up and transferring minute flakes of the material into a stack. The flakes are incredibly small, coming in at just tens of microns in diameter. Once combined, scientists were shocked to see the materials had created a moire superlattice — and that was what was responsible for creating such remarkable quantum phenomena.

Scientists next intend to determine how their new quantum system could be used in a variety of different and exciting fields. These include superconductivity, valleytronics, which is the study of pushing the boundaries of Moore’s law in regards to miniaturizing electronic components, and optoelectronics, which focuses on using light in an assortment of cutting-edge technologies.