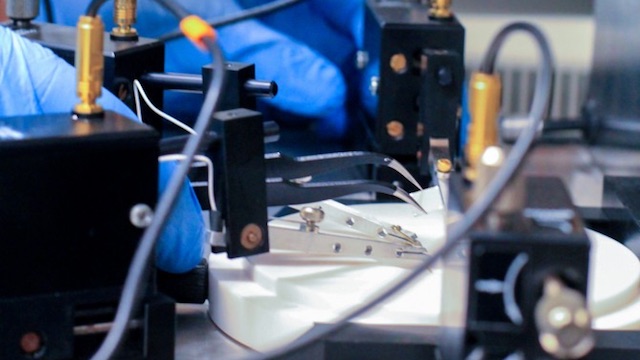 Scientists at Cornell University are investigating the potential that gallium nitride could offer when it comes to creating high-speed wireless communication and electronic devices. Gallium nitride is best known for its use as a semiconductor that’s proven remarkably effective in the development of energy-efficient LED lighting. Now, researchers believe it could be just as useful in the hunt to create devices that are fast, powerful, and energy-efficient.

Semiconductors have traditionally been made almost primarily from silicon. However, it simply lacks the needed properties to work effectively with more advanced technologies. In order to enhance its current flow, it is often doped with impurities such as boron or phosphorous. This provides the silicon with a positive or negative charge, depending on what the situation calls for.

“Silicon is very good at switching off and on and controlling electrical energy flow, but when you take it to high voltages it doesn’t operate very well because silicon has a weak electric strength, whereas GaN can sustain much higher electric fields. If you’re doing very large amounts of energy conversion, then wide-bandgap semiconductors such as GaN and silicon carbide are the solutions.”

Debdeep Jena, the David E. Burr Professor in Electrical and Computer Engineering and in Materials Science and Engineering

Researchers have been doping gallium nitride for decades; unfortunately, the process has proven inefficient. The material is doped by using magnesium impurities to create an absence of electrons, known as holes, which allows scientists to create a positive charge. But scientists think they’ve developed a far more effective method.

Instead of relying on impurities, scientists opted to stack a thin crystal layer of gallium nitride over a crystal of aluminum nitride. Due to the differences in their crystal structures, these two materials generated an impressive number of mobile holes. These 2D holes resulted in creating a gallium nitride material with a structure nearly 10 times more conductive than its traditional counterparts.

Scientists are continuing to investigate how they might manipulate the properties of gallium nitride to create a semiconductor capable of even greater speeds. A patent application for this process has already been filed, and researchers are looking into the possibilities for commercialization of their discovery.