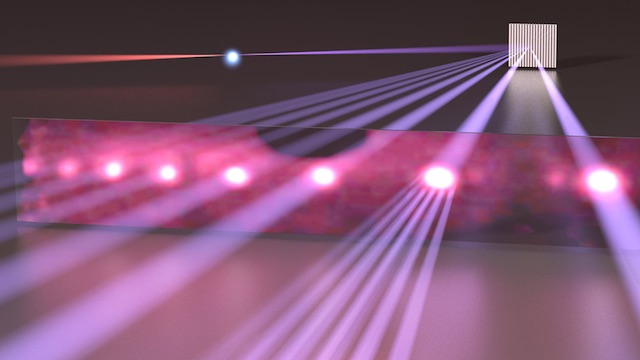 Scientists from the Harvard John A. Paulson School of Engineering and Applied Sciences and Stanford University have created a new type of integrated, on-chip frequency comb that is highly tunable and can be easily controlled with microwaves. Experts believe this technology will play a vital role in a wide range of applications, from environmental monitoring to astronomy.

Optical frequency combs are commonly used in an assortment of fields and technologies, whenever an application requires lasers simultaneously to emit multiple frequencies. The comb separates the light frequencies, allowing different colors to emit at the exact same time. Unfortunately, most modern combs are unwieldy and extremely pricey, making it difficult to use them as widely as scientists would like.

On-chip frequency combs could prove to be the solution to this issue. They are incredibly small and relatively inexpensive to fabricate. Unfortunately, previous generations of on-chip combs have suffered their own setbacks. They haven’t lived up to their bulky predecessor’s controllability, efficiency, and stability, making it hard to use them to their full potential. But scientists think their new innovations have changed all that.

“In optical communications, if you want to send more information through a small, fiber optic cable, you need to have different colors of light that can be controlled independently. That means you either need a hundred separate lasers or one frequency comb. We have developed a frequency comb that is an elegant, energy-efficient and integrated way to solve this problem.”

Marko Loncar, the Tiantsai Lin Professor of Electrical Engineering at SEAS and one of the senior authors of the study

The new comb is made using lithium niobite. By using this material, the comb can quickly and easily take electronic signals and convert them into optical ones. Lithium niobite boasts some impressive electro-optic properties, leading to significantly improved tunability in a comb that can cover the entire telecommunications bandwidth.

While older attempts at on-chip frequency combs only offered one tuning knob, the new models now have two. This allows for greater control of the various functionalities of the on-chip system. By using microwave signals, scientists were able to individually adjust the bandwidth and active frequencies of the comb, as well as the spacing between teeth and the height of lines.

Scientists are working on streamlining this technology, which they believe will have a profound commercial impact on a vast range of different devices and applications.