Creating A Tactile Interaction Strategy to Allow For Human-Swarm Communications 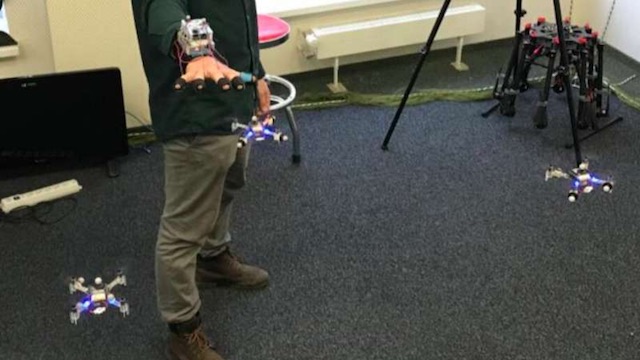 A team of researchers from the Skolkovo Institute of Science and Technology in Russia has created a new strategy that could help improve interactions between robotic swarms and their human counterparts. According to TechXplore, with this new technology human operators would be capable of communication with swarms of nano-quadrotor drones. They would be able to have control of the formation of the swarm, as well as be provided with ongoing tactile information from the swarm, in the form of vibrations.

“We are working in the field of swarm of drones and my previous research in the field of haptics was very helpful in introducing a new frontier of tactile human-swarm interactions. During our experiments with the swarm, however, we understood that current interfaces are too unfriendly and difficult to operate.”

During their research on human-swarm interactions, the team quickly learned that there are no interfaces that give humans the ability to deploy a swarm of robots while easily controlling its movements and trajectory. Most modern swarms must follow predetermined trajectories and cannot deviate from the plan once deployed.

The new proposed strategy is markedly different. It allows a human operator to guide a swarm by relying on the velocity of a user’s hand movements to alter the course and formation of the swarm as needed. To achieve this, simulated impedance interlinks would be used to connect the robots, allowing them to mimic the behavior of swarms found throughout nature.

The human operator would wear a tactile display in order to control the swarm. The wearable tactile would send patterns to the user’s fingertips, providing them with real-time data on the size and formation of the swarm. The user could then change the swarm dynamics just by moving their hands in different directions or altering the speed of the motions. This would allow the swarm to avoid obstacles and adapt to the environment as it changes.

Thanks to highly precise motion capturing technology known as Vicon Vantage V5, the system would be able to detect and adapt to the motions of the human user. The user and the robot swarm would also be connected thanks to impedance interlinks.

The team intends to continue their research into this new drone technology and hope to be able to use it in a variety of real-world situations.