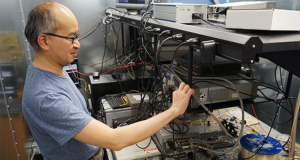 Researchers from the University of Toronto Engineering have built a new proof-of-principle of a device that could one day help to create a quantum internet. Scientists believe their new prototype could prove an essential component in developing long-distance quantum communication technologies.

Scientists have long sought to create a quantum internet. This would allow in theory for information-theoretic secure communication, which is becoming increasingly important in a world of security breaches and data spills.

A quantum internet could change all that. Scientists have developed ways to transmit data, using quantum physics to create a whole new level of encryption that would prove virtually unbreakable even to the most seasoned of hackers.

Unfortunately, there are some distinct challenges to creating a system of long-distance quantum communication. While traditional fiber-optic signals can use repeaters to boost and amplify their signal over great distances, quantum information operates differently. It requires storage of the quantum state at every repeater site. This makes creating the special repeaters far more difficult and costly than traditional models, especially since they sometimes can only operate at cryogenic temperatures — and even then, the repeaters have a much higher rate of error than those used in fiber optics.

But scientists may have finally found a solution to this vexing problem. They are determined to create the next generation of repeaters. These all-photonic quantum repeaters have a significant advantage over their predecessors. They can operate at room temperature, requiring no expensive environmental considerations by scientists.

“An all-optical network is a promising form of infrastructure for fast and energy-efficient communication that is required for a future quantum internet. Our work helps pave the way toward this future.”

Scientists believe their new device could be the breakthrough researchers have been looking for when it comes to creating a working quantum internet. According to their research, the technology could be used to maximize online security, alerting users instantly if someone was spying on their activity, and even possessing the ability to abort communication if sensitive information comes under attack.

The next step for the team is further developing their prototype and testing it out on a small scale. Should it prove successful, a quantum internet could be closer than we ever imagined.