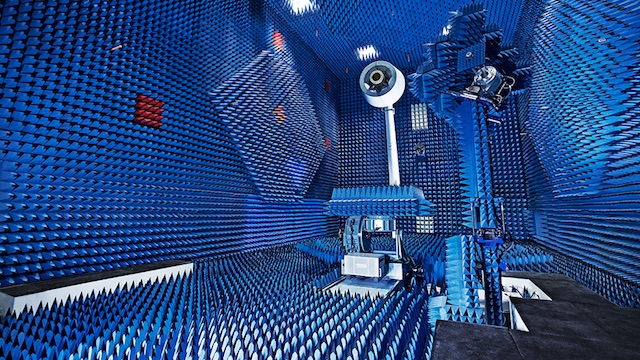 Scientists at the Department of Energy’s SLAC National Accelerator Laboratory have created a revolutionary new type of pocket-sized antenna that could help redefine mobile communication — even in situations where traditional radios simply can’t function. The new model has the ability work underwater, over extremely long distances through air, and even directly through the ground.

The 4-inch tall antenna operates by emitting very low frequency (VLF) radiation with wavelengths that can reach thousands of miles in length. The waves are extremely powerful, and capable of operating in all sorts of environments — even those that typically block radio waves with shorter wavelengths. And perhaps the most impressive part about this new technology is its diminutive size; while traditional VLF technology relies on enormous emitters to function properly, the new antenna is pocket-sized and can travel easily while still functioning at extremely high levels.

“Our device is also hundreds of times more efficient and can transmit data faster than previous devices of comparable size. Its performance pushes the limits of what’s technologically possible and puts portable VLF applications, like sending short text messages in challenging situations, within reach.”

Traditional VLF technology has been hindered by one big issue: size. Typically, an antenna should have a size similar to that of the wavelength it creates. This can prove a serious problem when scientists are attempting to cover tens of hundreds of miles. While there are smaller VLF transmitters out there, they suffer from low bandwidth — and even the more compact models still can weigh in at hundreds of pounds, making them problematic for search and rescue missions where mobile devices are essential.

Scientists think they’ve tackled some of these concerns with their new antenna, which weighs in at only a few pounds so as to be lightweight enough for mobile missions. Early tests proved that signals sent from the transmitter to a receiver placed 100 feet away produced VLF radiation up to 300 times more efficiently than other antennas with similar designs. Additionally, the new model had nearly 100 times better bandwidth than conventional compact antennas.

The secret to their success is something called the piezoelectric effect. It converts mechanical stress to a buildup of electrical charge, which can then be emitted as VLF radiation. Scientists believe this new method will let them tune wavelengths of much greater size and power, which could be used to communicate in places where radios won’t operate.

This technology could prove essential in search and rescue missions, as well as military operations in hostile environments. Scientists are working to streamline their invention to make it even smaller and more powerful.