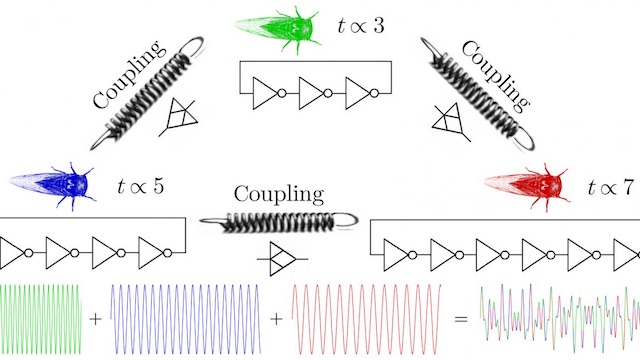 Scientists from the Tokyo Institute of Technology have devised a new way to generate ‘chaotic signals.’ Researchers believe this new technology could be useful in a variety of emerging applications, including creating wireless networks of sensors.

Recreating the signals found in a variety of natural systems, including those in the weather and organic brains, allows scientists to develop a better understanding of their underlying principles. Because these signals can be extremely complex, they are often referred to as ‘chaotic signals.’ The slightest change to a chaotic system can cause dramatic alterations in behavior. This makes them extremely challenging to predict, as well as to generate chaotic signals with specific desired features.

Scientists had previously tried to create chaotic signals digitally, but this proved to consume too much power in certain cases. An alternative was needed; and now, scientists have devised a new plan for generating chaotic signals — and prime numbers play a major role.

The research is based on the idea that cycles that have periods set by a variety of unique prime numbers are unable to develop a fixed phase relationship. Scientists then created a ring oscillator, which is found in integrated circuits. A ring oscillator does not require active components and is small in size. The circuit was then altered, allowing the strengths of ring oscillators with three, five, and seven stages to be controlled independently of each other.

The device proved capable of generating chaotic signals over a wide frequency spectrum. This included audible frequencies at 1kHz to the radio band of 10 MHz. It managed to accomplish this with relatively low power consumption, coming in at less than one-millionth of a watt. Additionally, scientists learned that they could generate vastly different types of signals by including slightly different characteristics in the individual prototypes. Scientists also discovered that there were situations in which the rings ‘fought each other,’ which allowed them to almost entirely suppress the activity in the rings. This is known as ‘oscillation death.’

Scientists believe this research could prove the first step in developing a variety of different applications. Their next move is to integrate the circuit with sensors. They also hope to design networks of oscillators on individual computer chips that will be interconnected in a way that mimics biological neural circuits. If this proves effective, it has the potential to allow them to engage in certain operations while consuming less power than a standard computer.