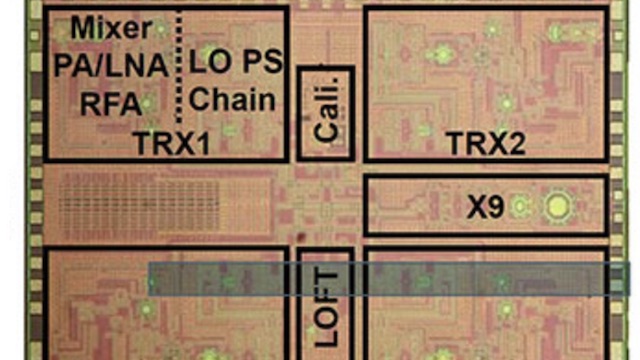 Scientists from Tokyo Tech and NEC Corporation, Japan have unveiled a new 39 GHz transceiver that comes with built-in 5G capabilities. Researchers hope this new technology will help to improve communication in 5G networks and other wireless equipment including Internet of Things (IoT) applications, smartphones, base stations, tablets, and more.

The device was inspired by 64-element phase-array design. The transceiver comes with a built-in gain phase calibration. This means that the device can improve beamforming accuracy. This could help to increase signal strength, as well as reduce the amount of radiation found in the design. The transceiver was fabricated in a standard 65-nanometer CMOS process. This means that the device is constructed from low-cost silicon-based components, which make mass production a much more viable possibility in the future.

The transceiver’s built-in calibration provides it with an extremely low root-mean-square phase error of 0.08 degrees. Unlike other traditional transceivers, which have issues with high gain variation of over 1 dB, the new device offers a maximum gain variation of 0.04 dB over the full tuning range of 360 degrees.

“We were surprised to achieve such a low gain variation when actually using the calibration based on our local-oscillator (LO) phase-shifting approach.”

The transceiver also comes with a maximum equivalent isotropic radiated power of 53 dBm. Considering the low-cost CMOS implementation, that provides the device with impressive power throughout its 64 antennas. The device was tested under anechoic chamber conditions indoors. They utilized one-meter, over-the-air measurements. This allowed researchers to demonstrate that their new transceiver is capable of supporting wireless transmission of a 400 MHz signal with 64QAM.

The increased communication distance comes thanks to increasing the array scale. This is a major step forward, but this is only the first step in improving 5G communications. Scientists now face a significant challenge: developing the transceiver so it can be used commercially in smartphones and other such devices.

The research on this new transceiver was presented at the 2019 IEEE Radio Frequency Integrated Circuits Symposium. It was held in Boston Massachusetts, where Yun Wang and the other authors on the paper received the best student paper award for their work on the project.