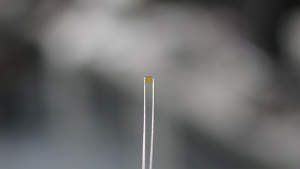 Scientists from the National University of Singapore’s Faculty of Engineering have designed a new type of smart microchip. Called BATLESS, the chip is capable of self-starting and operating even after the battery runs out of power. Researchers believe this technology could lend itself to creating smaller and cheaper devices for the Internet of Things (IoT).

Because of their versatility and interconnectedness, IoT devices frequently end up in remote locations. This makes it challenging for researchers to regularly service and maintain these devices; naturally, power efficiency is of vital importance. Unfortunately, battery miniaturization has proven tricky; those that work are often unreliable.

A new microchip could change all that. BATLESS is capable of continuing operations after a battery has run out of energy. It can even start itself under dim light, thanks to the aid of a tiny on-chip solar cell. The cell measures about half a square millimeter in size. Additional power can be provided through other forms of energy in the nearby environment. The microchip can actually convert heat and vibrations into usable energy.

The microchip achieves this by switching between two distinct modes: minimum-energy and minimum-power. Minimum-energy mode maximizes battery life as long as that energy source is available. Once the battery is no longer viable, the chip switches over to minimum-power mode. Minimum-power mode is roughly a billion times less than the amount of power your smartphone uses during a phone call.

BATLESS is capable of sensing, processing, capturing, and timestamping specific events. Once programmed, it can wirelessly transmit all this data to the cloud once battery power becomes available. Until then, it can continue to store and record information autonomously.

Although working without a battery admittedly slows down the speed a bit, even at its reduced speed, BATLESS is impressively fast. When operating without a battery. the microchip can operate a plethora of IoT applications. These include those that have to sense parameters that slowly alter and change over time, and can include pressure, light, humidity, and temperature.

This is a tremendous step forward in energy research and could help significantly reduce the size of batteries needed in order to power IoT devices. Besides maintaining levels of effectiveness, this would also make the devices up to 10 times smaller, and far cheaper to produce. Ultimately the team hopes to do away with the need for batteries in IoT devices — and this microchip is just the beginning.