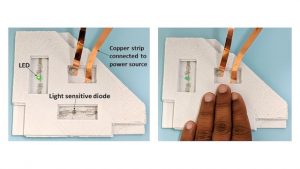 Smaller and better-performing biomedical implants, smart structures, advanced satellites, and tiny drones could all soon be on the horizon, thanks to a new innovation from engineers at Rutgers University. They’ve developed a technique that allows them to embed high-performance electrical circuits directly into 3D-printed plastics. This new research could help pave the way for devices that are smaller, faster, and more powerful than their predecessors.

To achieve this goal, engineers used pulses of high-energy light in order to fuse together tiny silver wires. The end result was circuits capable of conducting up to 10 times more electricity than current technologies on the market. The increased conductivity allows researchers to reduce energy use while simultaneously improving both the performance and lifespan of a host of high-tech devices.

Senior author Rajiv Malhotra, an assistant professor in the Department of Mechanical and Aerospace Engineering in the School of Engineering at Rutgers University–New Brunswick

By embedding electrical interconnections directly inside 3D-printed devices, engineers can develop a whole new series paradigms that will allow them to create smaller, more energy-efficient technology. Constructing devices out of polymers helps to enhance these features, and researchers are already investigating creating a host of small satellites, pressure sensors, light and motion sensors, drones, electrical grids for electromagnetic shielding, and even Global Positioning Systems.

Engineers employed cutting edge “intense pulse light sintering.” This means that they took high-energy light from a xenon lamp and utilized it in order to fuse together long, thin rods of silver. These nanowires are often used to conduct electricity in all sorts of devices including radio-frequency identification (RFID) tags and solar cells. However, the next steps in the process are a bit more unorthodox; 3D internal circuits are constructed to help allow for flexible internal circuits as well as an overall flexible 3D structure. The final product is a versatile, powerful, and compact 3D printed plastic powered by high-performance electrical circuits that open up a whole new world of potential technological possibilities.

Scientists at Rutgers will continue to work on perfecting their new technology, as well as exploring ways it can be adapted to work with a plethora of different devices and applications.