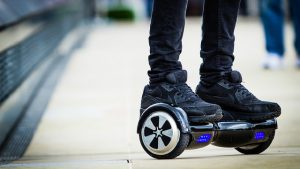 The popular self-balancing scooters called hoverboards have gotten quite a lot of attention recently, as consumers continue to report that certain models can unexpectedly burst into flames. In some cases, the fires started when the boards were being charged, but there have also been reports of fires starting while people were riding the boards. Although there hasn’t been an official recall yet, major online retailers including Amazon and Overstock have stopped selling most hoverboards, and several airlines have banned them. While investigations into the boards are still underway, it’s very likely that the fire hazard is caused by the rechargeable lithium-ion batteries. To address the growing concern, the Consumer Product Safety Commission (CPSC) issued a statement on the matter.

Chairman Elliot Kaye said, “I have directed agency staff to work non-stop to find the root cause of the fire hazard, how much of a risk it might present, and to provide consumers with answers as soon as possible.” The statement promises that the CPSC is working as quickly as possibly to find out if certain hoverboards have caught fire because of a safety defect. Engineers at the National Product Testing and Evaluation center in Maryland are testing various boards to examine them, especially focusing on the configuration of the battery packs and compatibly with chargers. CNN Money reports that Amazon sent sellers a notice asking for proof of compliance with applicable safety standards, including UN 38.3 (battery), UL 1642 (battery), and UL 60950-1 (charger). However, Chairmain Kaye points out that there is no safety standard in place specifically for hoverboards.

Retailers should always be asking their suppliers if there is an applicable safety standard in place before agreeing to sell those products. The absence of any standard should cause retailers to require extra proof of sound design, manufacturing and quality control processes.

Kaye suggested several safety tips for consumers who still plan to use hoverboards in the meantime. Several suggestions relate to avoiding falls that could happen on a traditional skateboard, but the emphasis was especially on safe battery charging practices, such as avoiding combustibles and letting the device cool down before charging. Additonally, Kaye warned consumers to buy from reputable retailers and to look for the mark of a certified national testing laboratory. “While this does not rule out counterfeits,” he says, “the absence of such a mark means your safety is likely not a priority for that manufacturer.”