Construction Completed On ‘Digital’ Film For the World’s Largest Camera 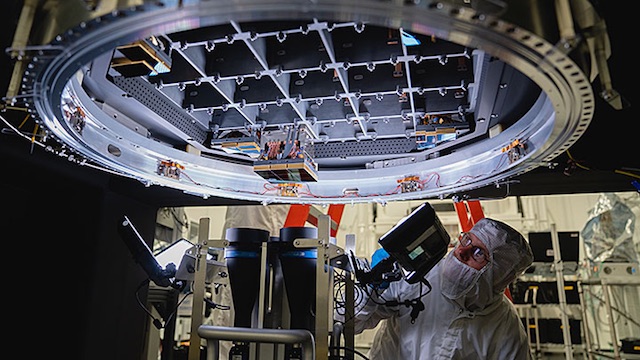 Scientists from the United States Department of Energy Brookhaven National Laboratory have successfully designed and built a 3.2 gigapixel sensor array for what is being called the world’s largest camera. This camera will be used in the Large Synoptic Survey Telescope (LSST) and is the result of 16 years of intense work.

Simply put, this charge-coupled device array is the largest of its kind that has ever been constructed. It offers 3 billion pixels, providing an unsurpassed view of the far reaches of space. It also comes with 200 16-megapixel sensors, which scientists have divided into 21 unique modules. The modules are capable of functioning independently of each other; however, when combined they offer an awe-inspiring, panoramic view of the sky. According to scientists, the modules are capable of fitting more than 40 full moons into one image. Scientists intend to take all these images and combine them into a time-lapse movie that will show off the depths of the universe like never before.

Research on the telescope began way back in 2003 at Brookhaven, although over 30 institutions from around the world have collaborated in its construction, which started in 2014. In order to make the LSST a reality, Brookhaven not only had to fabricate the test and assembly equipment for the science rafts, but it also had to construct a cleanroom and automated production facility.

And even with all that cutting-edge technology, creating the sensor array was no easy task. It must be cooled to -100 degrees Celsius and requires a vacuum in order to operate, and each piece had to be exhaustively tested to ensure optimum performance. But all that hard work has paid off. And even though Brookhaven has completed their component of the telescope, their work is far from over.

Scientists from the lab will participate in the commissioning phase of the telescope, providing expert insight and advice on the digital sensor array. The telescope is currently right on schedule and should begin operation by 2022. Researchers hope to use the powerful telescope to investigate dark energy, as well as dark matter. The LSST is also projected to have the power to locate and identify millions of asteroids in our solar system that we’ve never had the power to see before — until now.