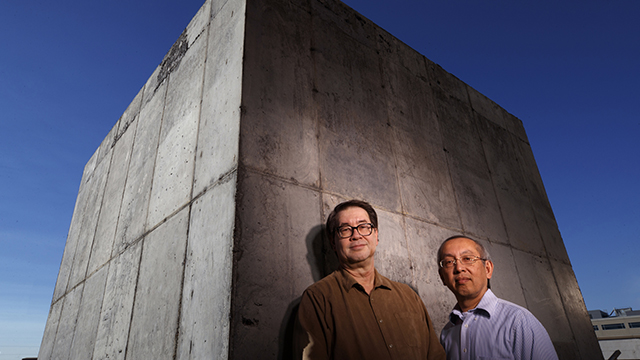 Electromagnetic pulses (or EMPs) are a danger that’s hard to ignore. While electromagnetic energy exists in nature without causing too much trouble in the form of everything from radio and X-ray waves to sunlight and microwaves, EMPs are a whole different story. These bursts of high-powered energy can have disastrous effects on technology in the surrounding area: they can wipe out communications, damage major infrastructures, and even cripple national security. Luckily, engineers and scientists are fighting back to protect technology from these dangerous attacks.

Engineers Christopher Tuan and Lim Nguyen from the University if Nebraska-Lincoln have devised a wholly unconventional way to safeguard vital technology from EMP attacks. While researching ways to keep roads from freezing over during snowstorms, the two engineers happened upon a startling discovery — one that had nothing to do with bad weather.

Tuan and Nguyen have developed a special type of concrete that actually blocks devices from EMP blasts. Anything inside buildings coated in the concrete mix — which can be easily sprayed on existing structures — would be kept safe from that sort of technological assault.

The concrete succeeds by blocking and absorbing the harmful waves created by the EMPs. Unlike traditional concrete, this special mix includes carbon, metal components, and magnetite. The combination of carbon and metal allows for better absorption and wave reflection, dramatically reducing the power of the blasts. Magnetite is a mineral that possesses the rare ability to absorb microwaves. When combined, the resulting concrete is a powerful defense against any EMPs.

EMP is very lethal to electronic equipment. We found a key ingredient that dissipates wave energy.

Christopher Tuan, professor of civil engineering at University of Nebraska-Lincoln

Although the concrete is still patent-pending, that hasn’t stopped excited companies from opting in to this new form of protection. The technology is already set for commercialization, and builders across the country have been lining up to make the list of prospective buyers. Unsurprisingly, many cities are also looking into this concrete as a way to protect their data and infrastructures from hostile attacks .