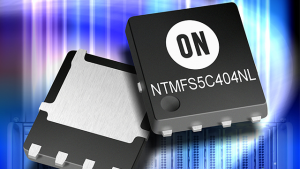 With a rated breakdown voltage of 40 volts (V), the company’s new NTMFS5C404NLT, NTMFS5C410NLT and NTMFS5C442NLT MOSFETs have maximum RDS(on) values (@ Vgs = 10 V) of 0.74 milliohms (mΩ), 0.9 mΩ and 2.8 mΩ respectively, with continuous drain currents of 352 amps (A), 315 A and 127 A respectively. These are complemented by the NTMFS5C604NL, NTMFS5C612NL and NTMFS5C646NL, all of which have breakdown voltage ratings of 60 V. The maximum RDS(on) of these devices is 1.2 mΩ, 1.5 mΩ and 4.7 mΩ respectively, while their associated continuous drain currents are 287 A, 235 A and 93 A. Both the 40 V and 60 V devices are rated to operate at junction temperatures up to 175 ˚C, thereby giving engineers greater thermal headroom for their designs. ON Semiconductor will be expanding this offering with devices which feature additional RDS(on) values and different packages,  such as micro8FL, DPAK and TO220.

“Engineering teams at OEMs are constantly striving to create power system designs that are capable of attaining higher degrees of efficiency while simultaneously taking up less board space,” said Paul Leonard, vice president and general manager for ON Semiconductor’s Power Discrete Products. “With these new additions to our extensive power MOSFET offering, we are providing customers with high performance devices, in compact thermally efficient packages, that will help them to achieve this goal.”