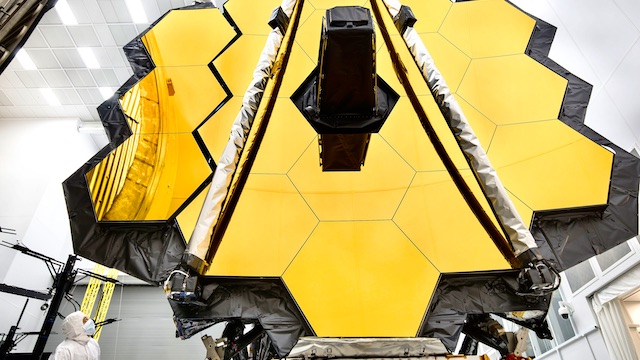 For the first time ever, a team of technicians and engineers at NASA have connected both halves of the James Webb Space Telescope enabling successful communication. The two halves are made up of a spacecraft and a telescope. They were connected using temporary ground wiring. Scientists believe this is a solid starting point for the technology that will be used during flight.

The test was done as part of an optional ‘risk reduction’ program that allowed the team to test their hardware months earlier than initially planned. This gave engineers the opportunity to identify and deal with any issues while still keeping to the schedule. Additionally, the test gave the two teams of scientists a head start on working jointly, which will be vital once the observatory is combined into one single piece.

Engineers used the test to make electrical connections between the flight spacecraft and telescope to fully understand the electrical interface and correct for any issues. During the test, the spacecraft used mirror motion on the telescope. From there, the telescope responded, and was confirmed using telemetry. This dry run will significantly reduce the chance of any unexpected problems arising during the actual flight.

This is just the next step in the process of preparing the telescope for launch. The team has been exhaustively testing and perfecting each piece of Webb in preparation. It is expected to be the most advanced space station ever, showcasing the combined efforts of an international assortment of scientists, researchers, and engineers.

Webb took another major step towards completion back in February. It marked the first time that all the primary flight components of the observatory were in the same location — Northrop Grumman in Los Angeles, California. From this spot, all the flight hardware will undergo a battery of tests before finally being assembled.

The observatory will be fully assembled and ready for flight some time next year. Scientists believe it will be an integral part of understanding some of the most profound questions humans have about the cosmos. Once fully active, the James Webb Space Telescope will be capable of helping researchers develop a better understanding of astronomy thanks to its cutting-edge visuals. Additionally, the unprecedented look at the stars will help scientists to improve upon current spacecraft designs.

The observatory will be launched from the Guiana Space Centre in French Guiana.