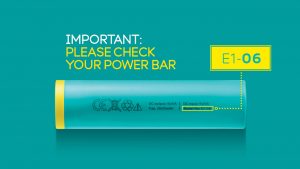 A British wireless carrier’s marketing campaign has backfired, thanks to a defective electronic product. Earlier this year, the U.K.’s largest mobile operator, EE, gave away 1.5 million portable cell phone chargers to their customers as part of a promotion. The gadget, called a Power Bar, shows how much charge is left on a cell phone and allows users to completely charge a dead battery once. Unfortunately, EE is now forced to recall the chargers after learning about five incidents where the product overheated and posed a safety risk to consumers. In one extreme case, a medical student suffered severe burns when her phone charger exploded.

EE insists that the chargers went through rigorous safety testing and met electrical safety standards. However, The Register has pointed out that some of the chargers have a CE marking that fails to comply with the European Union’s labeling rules. A statement from EE says they have “identified a very small number of incidents where Power Bars have overheated.” For now, just one particular batch of approximately 500,000 chargers is being recalled, but the company has also suspended its promotion and stopped giving away the Power Bars. A note on EE’s website states, “We’ve not seen any issues of overheating with other batches and they meet all safety standards.”