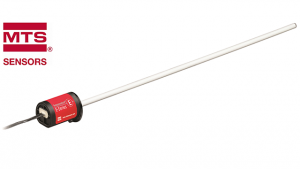 MTS Sensors, a division of MTS Systems Corporation (NASDAQ:MTSC), has announced an expansion of its EC-Series absolute position sensing product family. Based on the company’s industry-leading Temposonics® magnetostrictive technology, the new EC-Series models are designed to offer a higher degree of integration – with a choice of serial interface standards supported, plus built-in active signal conditioning functionality. Supplementing the original devices, which have direct signal outputs (both analog and start-stop), these additional versions have interconnects incorporated into the sensor housing that are compliant with either CANopen or synchronous serial interface (SSI) communication protocols. This results in enhanced system flexibility and added convenience. Depending on the cable length involved, the SSI and CANopen interfaces can handle data rates reaching 400kbits/s and 1000kbits/s respectively.

Specified for stroke lengths of between 50mm and 2500mm, both of the CANopen and SSI EC-Series devices exhibit less than ±0.005% full scale (FS) deviation in their repeatability and less than ±0.02% FS deviation in their linearity. These sensors have an operational temperature range covering -20®C to +70°C (-4°F to +158°F). Furthermore, they can withstand 90% relative humidity and are IP30 rated (in order to safeguard against foreign bodies).

To ensure precision position measurement, even when placed in the most difficult of application settings, the sensing devices manufactured by MTS Sensors are characterized by their exceptional resilience to shocks, vibrations and extreme temperatures. This is due to proprietary Temposonics® magnetostrictive technology the company has developed. The new EC-Series products are highly suited to integrated level measurement tasks inside items of industrial hardware – including hydraulic oil tanks, lubrications systems, waste water tanks, filling machines and medical equipment.

“Our EC-Series product offering has already proved popular thanks to its durability and compactness, delivering long term reliable operation and taking up considerably less space than alternative solutions. These traits are highly advantageous when working conditions are challenging and available room is limited,” said Robert Luong, MTS Sensors’ Industrial Technical Marketing Manager. “With the addition of CANopen and SSI interface derivatives, the appeal of EC-Series devices has been significantly increased.”