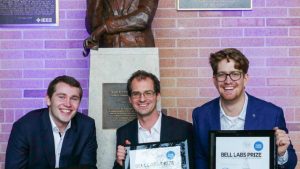 Three young researchers from the Technical University of Munich (TUM) have won a prestigious Bell Labs Prize, tied for third place in a global competition in information and communications technology. They showed how a single type of transceiver could be used across the full range of digital communications systems, ensuring in each instance that its transmission rate will approach the theoretical limit. Their method could enhance flexibility and reduce costs in the engineering of wireless, wireline, optical fiber, and satellite systems.

Dr. Georg Böcherer is a postdoctoral researcher in the Department of Electrical and Computer Engineering at TUM; Patrick Schulte and Fabian Steiner are doctoral candidates who began working with Böcherer as master’s students. The three share equally in the prize, a personal award of $25,000 from Alcatel-Lucent Bell Labs. The other prizes awarded went to a professor at Carnegie Mellon University and a professor at the University of California, San Diego.

The competition called for innovative proposals “that have the potential to change the way we live, work, and communicate with each other.” From more than 250 ideas submitted in April, the field was narrowed to 20 teams. These were matched with Bell Labs researchers and business managers to further develop their proposals. Seven finalists presented their ideas at Bell Labs’ headquarters in the U.S. The criteria on which they were judged included innovation potential, technical merit, feasibility, and business impact. One first prize was awarded; the TUM team tied for third place, and no second prize was given.

“Nothing brings out the creative power of research better than competing to transform society and grow industries,” says Marcus Weldon, president of Bell Labs and chief technology officer of Alcatel-Lucent. “The Bell Labs Prize celebrates the interplay of science and engineering that has flourished here for 90 years, allowing us to dream up the future and create the ideas that will build the technology necessary to get us there.”

Information theory determines the upper limit to how much data can be transmitted reliably over a given channel, taking into account characteristics such as the signal-to-noise ratio. Over the past few decades, engineers have developed information coding and modulation schemes that seek to optimize performance for specific types of systems, but two serious challenges remain: There’s always a gap between what theory predicts and what the technology can deliver, and no approach is universally applicable. The TUM researchers claim to have overcome both of these limitations.

Their “RateX” method brings together three essential functions for the first time, in a way that offers the industry an unprecedented level of flexibility. “It’s an elegant solution,” says Prof. Gerhard Kramer, Chair for Communications Engineering, “creating a clean layering of signal shaping, encoding, and modulation within the physical layer of the Open Systems Interconnection model. This is a universal method that could become the de facto way of doing things in the future.”

Many components used in diverse communications systems today could be replaced by a single chip implementing the RateX algorithm. Not only would such a chip be less complex and more power-efficient than today’s technology, but it also could offer cost and reliability advantages associated with economies of scale. Within ten or fifteen years there could be billions of such chips in use if, as Kramer expects, the RateX method becomes standard for 5G wireless, optical, satellite, DSL, and other communications technologies.

Combining the distribution matcher and a novel coding design with existing tools should push practical transmission rates to the theoretical limits – and the first experimental studies with optical fiber and wireline DSL systems appear to confirm this. The practical consequences should include higher data rates, a longer reach, and lower power consumption for all kinds of systems. Because RateX adapts easily to the actual channel, it should be as well suited for the short-range wireless links that will be a ubiquitous feature of the “Internet of Things” as for the world’s long-haul fiber-optic backbones.
___

This research has been supported by the German Federal Ministry of Education and Research (BMBF) in the framework of an Alexander von Humboldt Professorship and by the TUM Institute for Advanced Study.