Chroma Systems Solutions has announced the world’s first synchronous multichannel hipot tester allowing leakage current testing and reporting of up to 100 devices simultaneously. The 19020 Series Multichannel Hipot Tester utilizes a brand new architecture to measure hipot leakage current of all channels at the same time and conducts tests on a maximum of 100 DUTs simultaneously increasing regulatory test efficiency and productivity.

The 19020 was developed with the world’s first synchronous Hipot test function allowing one single unit to perform 10 channels sync output and measurements at the same time. A maximum of 10 units can be controlled for 100 channels in total. They can be grouped for output to avoid creating voltage differences. Chroma’s 19020 synchronizes the output signal removing risk of high voltage differences on adjacent DUT’s minimizing any occurrence of error in the test. Taking 5kVac output voltage for example, when the output of Hipot tester is not synchronized, two nearby DUT’s may create a difference of high voltage discharge of up to 14kV peak-peak causing damage to the fixture and erroneous testing. 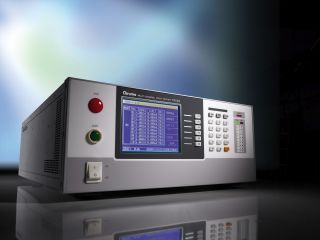 Through its I/O interface, test results are reported individually and collectively simultaneously. The 19020 offers memory recall for easy implementation in automated environments allowing recall of the first 7 memory locations providing individual test results from CH1-CH10 and a general PASS_FAIL result making it very simple to use with a PLC.

Chroma’s 19020 also has powerful functions in Flashover detection and Open/Short Check. Flashover is the electrical discharge generated by high electric field inside or on the surface of insulation material that makes the DUT to lose its insulation characteristic and form a transient or discontinuous discharge. Flashover can cause a carbonized conductive path and damage to the DUT. Flashover cannot be detected by monitoring leakage current only. The 19020 monitors change rates of test voltage or leakage current to detect flashover making it an indispensable function of the electrical safety test. The Open/Short Check (OSC) function checks if any Open (bad connection) or Short (DUT short circuited) occurred during the test. If the DUT has an open circuit during testing, a bad unit might be mistaken as a good one. If the DUT has short circuit, the OSC function filters it out to reduce damage to the fixture.

The Chroma 19020 Multichannel Hipot tester can be used in various applications where testing multiple DUT’s at once benefits productivity such as quality assurance sampling and production line testing. Applications include automation of power cord and related cable materials, automation of capacitor and resistance, insulation test of switch and connector, one time test for transformer with multiple pins or multiple units, and production planning for chargers and adapters. With the 190201 3-CH scanner added, the 19020 can complete three Hipot tests at one time. For example, testing a two winding transformer the following three Hipot tests can be done at one time within a DUT loading time; Primary to Secondary, Primary to Core, and Secondary to Core Hipot test. This application can be applied to transformer, power adapter, and common mode chokes.