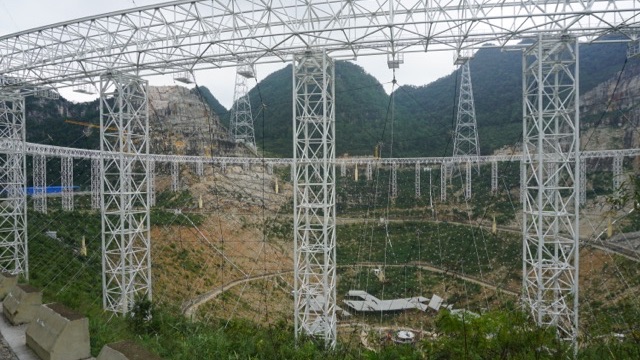 Size does matter — at least when it comes to radio telescopes. For years, the title of largest on Earth has belonged to the Areciba Observatory in Puerto Rico. But the 1000-foot technological wonder has finally been outmatched by a device of truly astounding proportions.

It took a long time to get here. According to Xinhua News Agency, the project has been under construction for 5 years, and Chinese astronomers spent nearly 11 years getting approval and funding. At an estimated cost of almost $180 million, this is no small undertaking. However, scientists are confident that their investments will pay off handsomely.

“(The telescope) will certainly generate enthusiasm, bring people into science, and make China important in the world of science.”

The goal of FAST (besides earning the title of largest radio telescope) is to seek out and discover extraterrestrial life. So far, it’s already proving impressive capabilities. During the testing process (the device was completed in July), FAST was able to pick up electromagnetic waves sent from a pulsar over 1,350 light-years away.

A device this big doesn’t come without some complications. The size alone means that the local government has had to relocate a portion of the population in Pingtang County. Approximately 8,000 people have been resettled to ensure the effectiveness of the device, which requires a 5 kilometer radius of radio silence to work effectively. Even cell phone use in the area is banned, lest the high sensitive technology be compromised in any way.

Despite these issues, scientists are convinced that FAST is the beginning of a new era in space exploration and discovery, for both China and the world at large. With more than twice the sensitivity of Arecibo, FAST is hoping its major investment will pay off in new discoveries, and a new zest for exploring the universe around us.