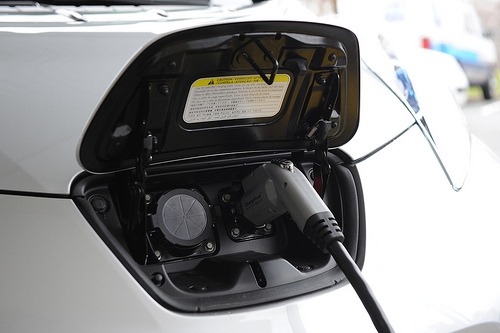 In order to reach an ambitious goal of putting 5 million electric cars on the country’s roads by 2020, the Chinese government is speeding up the construction of a network of car chargers. China has been making progress on building a charging infrastructure, installing 50 car charging stations along the route that connects Bejing and Shanghai earlier this year. Still, Zheng Zhajie of the National Energy Administration says the previous approach was too scattered because of non-uniform standards set by manufacturers such as Tesla Motors and BMW, which have built their own charging stations in the past. Zhajie told national news agency Xinhua:

It’s like with phone chargers, it’s a bit all over the place. Everyone has a pile of different chargers and a pile of batteries. Now we’re trying to improve things, moving towards unifying and standardizing.

Now the government is pushing to have charging stations installed in ten percent of public parking facilities. Making it easier for people to charge electric vehicles will help alleviate range anxiety encourage more people to buy the latest eco-friendly cars. An increase in electric vehicle sales would help China tackle major environmental and economic concerns. Decreasing pollution is an urgent matter in China, which is notorious for its polluted cities (it has gotten so bad that face masks are a fashion accessory in Bejing). On top of that, widespread adoption of electric cars would help keep the momentum that the country has going in the automotive market. Electric car sales have quadrupled in China over the past six years, even though the overall car market has slowed during this time.