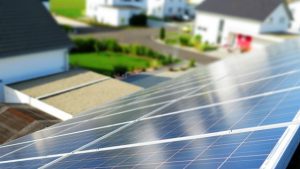 Today’s solar cells are pretty amazing, thanks to research advances inspired by art, computers, and even bubbles. Silicon-based cells now perform nearly as well as their theoretical limit. However, an alternative to silicon called cadmium telluride (CdTe) still has significant room for improvement. Compared to silicon, CdTE solar cells are less expensive, have a lower carbon footprint, and perform better in imperfect weather conditions. However, silicon has been the preferred material for solar cells because it is very efficient.

Now, researchers have achieved a new milestone that could finally make CdTe solar cells efficient enough to compete with silicon. The project was a collaboration between the U.S. Department of Energy’s National Renewable Energy Laboratory (NREL), Washington State University, and the University of Tennessee, funded by the Energy Department’s SunShot Initiative. By using a new process to grow crystals of the material, they were able to improve the maximum voltage for a CdTe solar cell, called open-circuit voltage. For the past six decades, nobody had been able to achieve more than 900 millivolts out of the material, but now researchers have crossed the 1-volt threshold with CdTe for the first time.

The researchers published their findings in Nature Energy. They wrote:

CdTe solar cells have the potential to undercut the costs of electricity generated by other technologies, if the open-circuit voltage can be increased beyond 1 V without significant decreases in current.