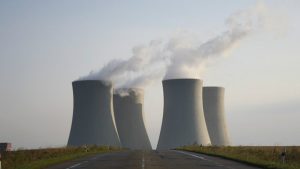 The intense radiation that nuclear reactors produce can make the reactor’s metal porous and brittle, which leads to cracking and failure. An international team of engineers has discovered an inexpensive solution. They found that adding a small amount of carbon nanotubes to metal makes it more resilient, so it can withstand extreme radiation exposure without breaking down. The researchers—from MIT, Texas A&M, and universities in Korea, Chile, and Argentina—described their discovery in a paper that published in the journal Nano Energy.

When nuclear fission occurs inside reactors, gases such as helium get trapped inside the metal and slowly make it weaker. By adding a small amount of carbon nanotubes to aluminum, the researchers created a composite material that has one-dimensional “nano chimneys” that  helium uses to escape the metal. Even before the composite was exposed to radiation, it was already stronger and exhibited better “tensile ductility,” meaning it was able to deform without breaking. After radiation exposure, a control sample became porous and brittle, but the new material was five to ten times more resilient. 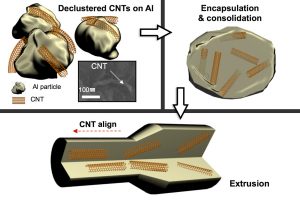 The carbon nanotubes only make up one or two percent of the composite, and they are inexpensive and easy to produce. So far, this new technique has only been proven to work for aluminum, but it could also be used on other metals to make a composite that would be suitable for commercial reactors, or perhaps other extreme environments such as space.