Can Wi-Fi Signals Be Transformed Into Usable Power? 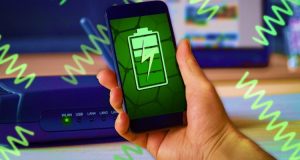 Massachusetts Institute of Technology (MIT) physicists have created a design for a device that could take Wi-Fi signals and turn them into electricity. The blueprint outlines technology that would take the ambient terahertz waves that come from wireless signals and convert them into a usable and clean source of energy.

If you have a device that sends out a Wi-Fi signal, you are in the presence of terahertz waves. These are electromagnetic waves that lie on a frequency between infrared light and microwaves; and any technology that emits a wireless signal is sending out terahertz waves as well. While scientists have longed to harness this source of energy, nobody has yet been able to offer a viable suggestion — until now.

The device envisioned by MIT engineers relies on the quantum mechanical to achieve its goal. This is the technical term for the atomic behavior of graphene, the carbon material utilized in the design. If the graphene is combined with boron nitride, engineers believe that the electrons in the graphene will all trend in a certain direction. As terahertz waves move through the electrons of the graphene, they will flow the material in a single, specific direction. This will ultimately result in a direct current of viable electricity.

“We are surrounded by electromagnetic waves in the terahertz range. If we can convert that energy into an energy source we can use for daily life, that would help to address the energy challenges we are facing right now.”

The team behind the blueprint believes that in the future, this technology could be used to help wirelessly power medical implants. This could effectively help reduce the need for surgeries meant to replace the batteries in an implant. Additionally, the power from Wi-Fi signals could even be used to charge personal electronics.

But before all that comes to fruition, the device must first become a reality. With that in mind, the MIT team is working with experimental physicists to create a real-life version of their design. They have also filed a patent for their ‘high frequency rectification‘ design and recently published their findings in the journal Science Advances.